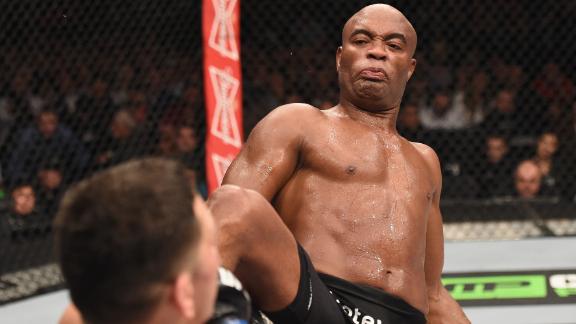 NSAC executive director Bob Bennett confirmed to ESPN.com on Tuesday that Silva, 39, failed his postfight urine test after a unanimous decision win against Nick Diaz at UFC 183 on Jan. 31.

In total, Silva (34-6) submitted to three NSAC tests. He tested positive for drostanolone and androstane on Jan. 9. He then provided a clean sample on Jan. 19 followed by a second failed test on Jan. 31.

Silva, who had never tested positive for a banned substance, initially faced a nine-month suspension for his first offense. Bennett did not know whether the commission would increase that length because of a second failed test.

"I can't speak for the [NSAC] Chairman nor can I speak for the commissioners," Bennett told ESPN.com. "But something I find particularly concerning is that he tested positive on Jan. 9th and then he tested negative on Jan. 19th. If he took this orally, it only stays in your system 5-to-7 days.

"So, obviously, he used it sometime around Jan. 9th and then he used it shortly before the night of the fight. Whether the commission finds this egregious -- that he tested positive twice out of three times -- is up to them. I certainly find it concerning and unacceptable. It gives an unfair advantage to the person on that. God forbid, a serious injury were to occur to an opponent when someone is on something."

Silva, widely considered the greatest fighter of all time, has denied knowingly taking any banned substance.

"I have not taken any performance-enhancing drugs," Silva said shortly after the initial failed test. "My stance on drugs is and will always be the same. I'm an advocate for a clean sport."

The NSAC temporarily suspended Silva on Tuesday. A disciplinary hearing, which Silva would be required to attend, likely will be scheduled in March.

Diaz (26-10) also failed his fight-night drug test for marijuana metabolites. He tested negative for all other banned substances.

The NSAC will determine whether to change the result of the fight to a no-contest at a later date, most likely during Silva's disciplinary hearing.

Silva's fight-night sample, collected on Jan. 31, arrived at the processing lab in Salt Lake City on Feb. 2, according to lab reports relayed by Bennett. The lab reported the results to the NSAC on Feb. 10.

Bennett said results were not immediately circulated to the media as a courtesy to the licensed athlete, Silva. According to Bennett, Silva's representatives had inquired on the possibility of testing the "B" sample of his first failed test but have so far not submitted an official request to do so.