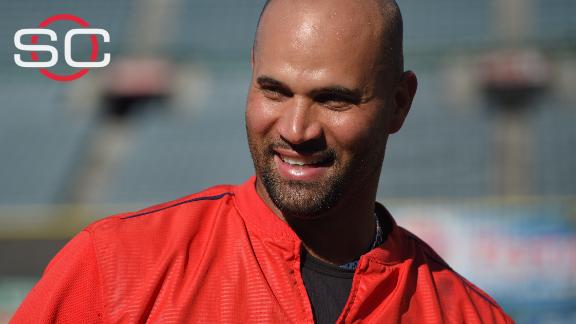 Alberto Jr. and Ezra got their wish.

Pujols, the Los Angeles Angels' first baseman, says he talked with Major League Baseball and confirmed he will be one of the hitters for the event Monday in Cincinnati. The All-Star Game is the next night.

"I'm going to give it one last chance," Pujols said Tuesday. "The good thing with Major League Baseball is they allow us to bring our kids onto the field on practice day so they'll be able to enjoy that. They'll have a great time and meet the players they get to watch every day."

Pujols said he wanted to be a part of the competition after being picked for the AL All-Star team this week. He will start in place of Detroit's Miguel Cabrera, who went on the disabled list for the first time in his career with a strained calf.

Pujols declined to be in the Home Run Derby last year because he was not playing in the All-Star Game.

"You want to be in the game," he said. "That's the most important thing because you want to be able to have a chance to help the American League have home field advantage."

Pujols said he received a call Monday that he was named to the reserves and relayed the message to Alberto Jr., who had been texting him all morning.

"He was pretty pumped up because he gets on the field," Pujols said.

This will be Pujols' fourth time competing in the Home Run Derby. He reached the semifinal in 2003, 2007 and 2009 but has never won the event.

He said he is looking forward to the new format. Instead of being given a number of outs per round each player will have five minutes to hit as many home runs as possible. The clock will stop after home run balls land in the final minute.

Players can earn an extra minute if they hit two home runs that land 420 feet or more and 30 seconds for each blast that lands 475 feet or more.The maximum bonus time a player can get is 1:30.

"If anything it'll be better because you don't have to sit around so much like you did in the past," he said. "If I hit in the first round we had to wait until everybody hit and sometimes you sat an hour and a half, two hours."