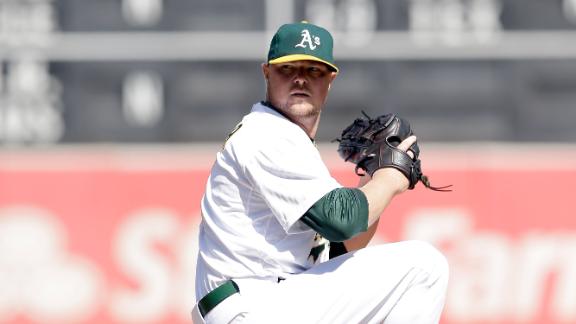 KANSAS CITY, Mo. -- In a winner-take-all game where runs figure to be at a premium, the Oakland Athletics prioritized defense over the potential for more scoring chances with a surprise starting lineup.

Fuld's presence is what essentially knocked Dunn into a late-inning pitch-hitting role for his first ever postseason game after 14 big league seasons (2,001 games).

"That's a tough decision, but it did come into play," Melvin said. "It's a big outfield; it's a fast opponent. (Fuld) plays the corners great. When you're talking about (A's starter) Jon Lester, righties pull the ball and lefties go the other way. That definitely factored in. At times we'll go offense early and defense late. Other times we'll do defense early and offense to match up a little more."

Not to be overlooked is the fact that Dunn has struggled against Royals starter James Shields in his career. He is 7-for-35 (.200) with 16 strikeouts against the right-hander.

He also batted just .212 with a .316 on-base percentage since coming over to Oakland in an August trade from the Chicago White Sox.

Oakland's complete lineup had Coco Crisp leading off in center field, Fuld in left and Josh Donaldson at third base. Moss was the cleanup hitter, followed by Josh Reddick in right field andJed Lowrieat shortstop. Vogt was batting seventh, with Soto in the No. 8 spotand Eric Sogard rounding out the order at second base.

Dunn was in line to get an at-bat later in the game, but that won't be any easier since the back end of the Royals' bullpen is as good as anybody's with Wade Davis in a setup role and Greg Holland at closer.

Melvin went out of his way Tuesday afternoon to inform Dunn of the decision.

"I let him know what we're looking at so he's not surprised when he sees the lineup," Melvin said. "All our guys know that we do things a little differently here at times. We're trying to play for the day and he understands too that just because you don't start a game for us doesn't mean you might not be prominent in the course of the game and may have the biggest at-bat of the game so he's ready for that."

Soto, who was traded from the Texas Rangers to the A's on Aug. 24, did not start during a Lester outing in the regular season. He got the call over catcher Derek Norris.

"(The Royals) steal a lot of bases and Soto does a great job with that," Melvin said. "He's worked very well with all the pitchers on our staff since he's come over and acclimated very quickly. They like throwing to him and he has a better history right now throwing guys out. And he's swinging the bat well too."

The Royals went with a more typical lineup of shortstop Alcides Escobar in the leadoff spot, followed byNori Aokiin right field and Lorenzo Cain in center.