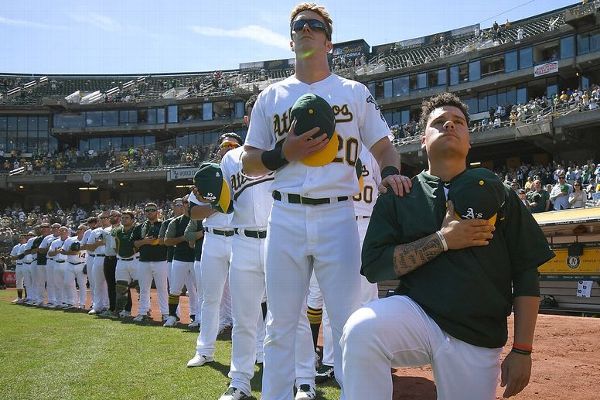 OAKLAND, Calif. -- After Saturday's pregame meetings with the general manager, the manager and all of his teammates, Oakland Athletics catcher Bruce Maxwell became the first Major League Baseball player to kneel during the national anthem in protest of racial inequality in the United States.

As Maxwell knelt Saturday, he was joined by outfielderMark Canha, who stood next to Maxwell with his hand on Maxwell's shoulder during the anthem. He did the same on Sunday in a show of support as Maxwell took a knee for the anthem for the second straight day.

Maxwell's protest came 405 days after formerSan Francisco 49ers quarterback Colin Kaepernick began the trend of athletes using the national anthem as a platform to express their concerns about racial issues in the country. Since then, players in many other sports have offered similar protests, including kneeling, raising a fist or locking arms during "The Star-Spangled Banner."

On Sunday afternoon, Canha offered his best guess as to why the first protest on an MLB field came well after Kaepernick began the practice.

"Baseball has a lot of interesting dynamics that I'm not sure, I don't know if they exist in other sports or not because I'm not in those sports," Canha said. "With all the unwritten rules of baseball, and I personally -- I haven't thought about this much, to be honest, so this is me kind of coming up with an answer off the top of my head -- but I think that with all of the unwritten rules in baseball, there's certainly this concept of how to act when you're in a major league clubhouse and when you're on a major league baseball field. I think involved in all of that is a feeling of not wanting to rock the boat, so to speak. And I think that people are a little bit hesitant to speak their mind all the time, which I think is kind of a disappointing part of baseball.

"I think people should be able to express themselves. I think people should have fun on the field and celebrate how they want to celebrate and express their political beliefs if that's what they want to do. That's what this country is founded upon, was the idea that people should be able to do that, 300, 200 years ago. So I think that people love playing this game, and they love their jobs in this game, and there's this idea to want to hold on to that so badly and not want to rock the boat. That's not what the founding fathers had in mind."

"More power to him, man. He's standing up for something great,'' Durant said across town after the team's second practice of training camp. "We all respect it, support it and appreciate it.''

Maxwell, who is still working his way back from a concussion, was not in Oakland's lineup for Sunday's game against the Rangers and declined to speak to the general media again after answering questions for about 10 minutes following Saturday night's game. Maxwell said in that news conference that he plans to continue the protest.

Canha wasn't the only one who pointed to some of the differences between baseball and other sports when asked why the protests took a while to make their way to Major League Baseball.

"I really commend Bruce. He's really brave for that, especially in baseball," shortstop Marcus Semien said. "Baseball is a different sport. We have a lot of guys coming from all over the country, all over the world. It's just a different animal. I think Bruce did a great job of coming to us and explaining to us what he's been through in his life, what he's been through this year, what he's noticed is going on in the world and our country, especially. Just his background. I've met his dad -- he's a military man. Bruce is from Alabama, a place that's had a lot of racial divide, a lot of divide with people. So yesterday, he chose to do what he did, and he's very brave for it."

Multiple A's players and manager Bob Melvin pointed to Maxwell's willingness and ability to communicate why he wanted to take part in the protest as the primary reason his teammates were willing to support him.

Melvin said that before Maxwell knelt, he met with Melvin, GM David Forstand his teammates to give them a chance to ask questions and gain a better understanding of why he wanted to protest.

"I think the last thing everyone wanted was to be surprised by something like that because we all know that we're going to be asked questions about it. Not only did he communicate what he's going to do, but he went in with reasons for it," Melvin said. "So I think everybody was comfortable, and it made it a more comfortable situation, and certainly today, after what transpired yesterday, it's just kind of business as usual."

Second baseman Jed Lowrie characterized the meeting as having a fair amount of give and take, noting that all of it was "constructive." While acknowledging that he is not bothered by the protests so long as guys are being respectful, he said he learned more about Maxwell in that meeting.

As for whether other players will join, as has happened in other leagues, particularly the NFL, Canha said he wasn't sure but hoped that they would.