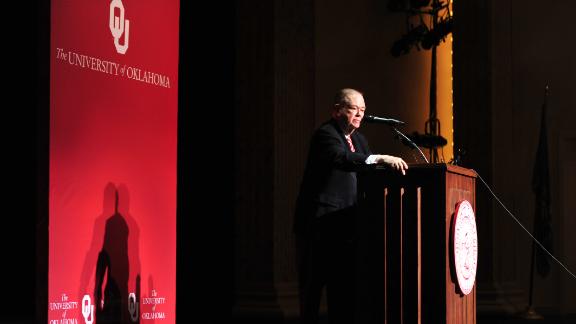 NORMAN, Okla. -- A racist video threatened to divide the Oklahoma football team. The leaders on the squad weren't having it.

Players released a statement on their social media accounts Thursday, saying they were committed to eradicating racism and calling for the expulsion of fraternity leaders connected to the video.

"Allowing this culture to thrive goes against everything it means to be a Sooner," said the players, who vowed to "attempt to end the culture of exclusivity" on campus, raise awareness of racism, and show "we are defined by more than the numbers on our jerseys and that we are human beings that desire to get to know our classmates."

After the initial outrage among the players, seven of the team's leaders -- Trevor Knight, Eric Striker, Ty Darlington, Charles Tapper, Nila Kasitati, Sterling Shepard and Zack Sanchez -- listened to their teammates and leaders from other athletic teams on campus, then met among themselves over a three-day period to figure out how to proceed.

The racially diverse group created a unified statement about using their platforms to "promote meaningful change at a national level," starting with their campus.

The team has not practiced all week, instead silently demonstrating by walking together arm-in-arm and wearing black at Owen Field during its normal practice time. The players did so again Thursday afternoon with coach Bob Stoops front and center at the school of 27,000 students, about 5 percent of whom are black.

"It was initially, for everyone, an igniting issue, something that provoked a lot of feelings, as we've seen from all the reactions of it," said Darlington, who is white. "It was no different on our team. We're human beings. Every one of us had a lot of conflicting emotions. I think very quickly, we realized that whatever we do, we have to do it as a team, or else it was going to divide everyone."

Demonstrations were not reserved for just the football team. The Sooners men's basketball team elected to wear all black shirts during warmups prior to their Big 12 tournament quarterfinal game against Oklahoma State on Thursday night.

Two students have been expelled and university President David Boren ordered the chapter house to be shut down. Boren plans to meet with team captains after spring break, but the players haven't waited to express their displeasure.

Striker, whose angry Snapchat message in response to the video drew national publicity, said he generally feels good about his school.

"Who am I, or who is anyone, to address someone's level of reaction to something that can be so hurtful?" he said.

The situation already has hurt the football program, usually a national power. North Mesquite (Texas) High School football star Jean Delance, a top offensive lineman prospect who had verbally committed to Oklahoma, said he would not attend the school because of the video.

Two other verbal commitments from the Class of 2016, both black, will stay. Jon-Michael Terry, a tight end out of Victory Christian High in Tulsa, Oklahoma, and Adrian Hardy, a quarterback out of Dekaney High in Houston, have not changed their plans.

Victory Christian football coach Brent Marley said he discussed the situation with Terry, and nothing changed.

"As long as they (those leading the chant) were escorted off, and they have nothing to do with OU, and OU stood up for their kids -- I'm OK with that," Davis said. "It would have been different if OU wouldn't have stood up for what was right. What was right to me was when they stood up and those students were removed from the school. I'm fine with that."

The situation forced Knight, who is white, to look at race from a different perspective.

"For me, it's an issue that, me personally, I won't necessarily ever understand what it's like to be called that name and the ramifications of it and how you feel in your heart," he said. "But as a leadership group, and as a member of a team with all different walks of life, you have to take that into account, and you have to hear everybody with an open mind and realize that everybody's going to be affected in a different way.

"So that was our main goal through all of this, is that we want what's best for our group. Not for individual people, not for whites, not for blacks, but for the entire group as a whole."

Striker said he accepts SAE's apology, but he still feels there needs to be accountability.

"Peace here on this campus and awareness is our drive," he said. "That (the apology) means something. We're forgiving people. But we just feel like those are the steps we needed to take."