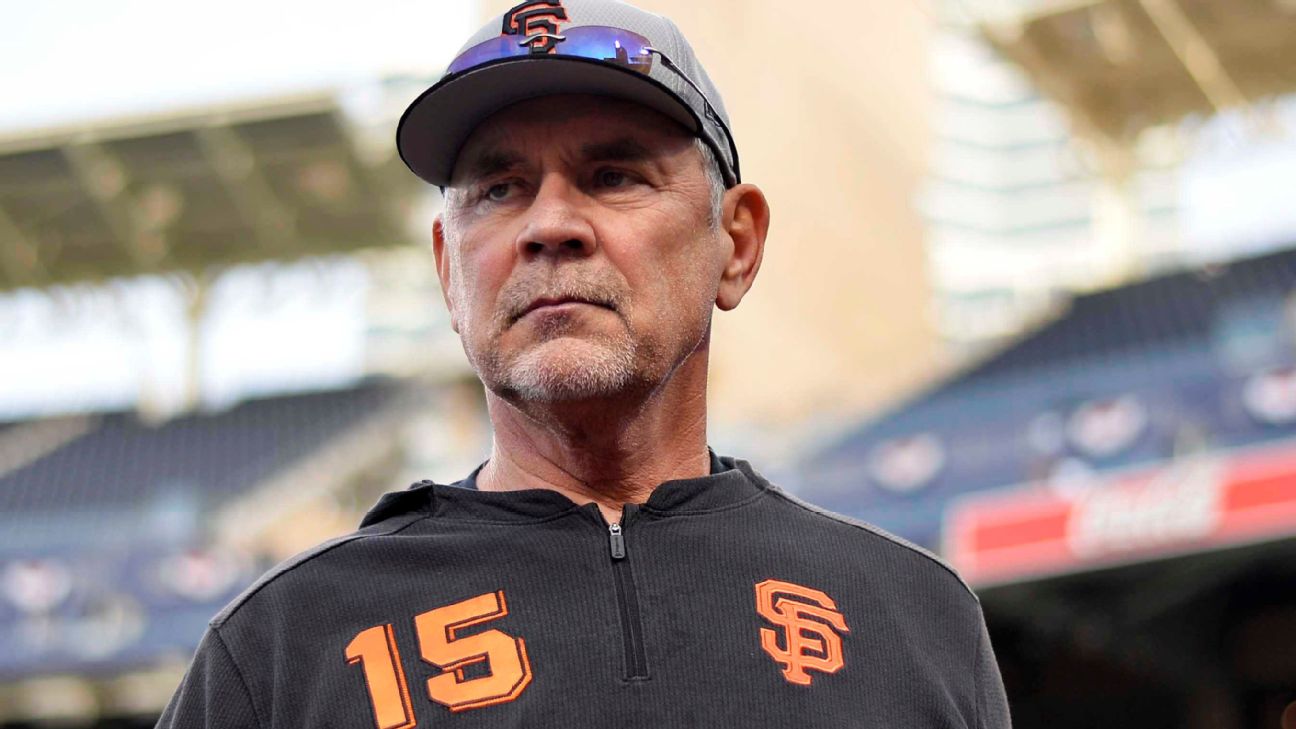 ESPN
SAN DIEGO -- Bruce Bochy isn't allowing much time for nostalgia during his final weekend in San Diego as a major league manager.

His San Francisco Giants are playing too well for the skipper to spend much time thinking back on the 12 seasons he managed the Padres.

"Maybe the last day I'll start doing more reflecting," said Bochy, who has an offseason home in Poway, about 25 miles northeast of Petco Park. "I'm really concentrating on what's going on with this team."

The Giants have now won 18 of their past 22 games, including Friday's 2-1 extra-inning victory over the Padres, to jump into the National League wild-card race.

Bochy announced during spring training that this would be his 13th and final season managing the Giants. After he was pushed out as San Diego's manager following the 2006 season, he took the Giants job and led them to three World Series titles between 2010 and 2014.

"I made this call back in spring training, and I said then I was going to kind of put it behind me and keep the focus here on the field, and that's what I'm trying to do," Bochy said before the Giants and Padres opened a three-game series Friday night. "There's no question the last day driving here it's going to be a drive down memory lane, all my moments here, both with San Diego and San Francisco."

The Padres honored Bochy with a pregame ceremony, showing a video montage of his years playing with and managing the Padres. Former players Carlos Hernandez, Steve Finley, Andy Ashby and Mark Sweeney joined owner Ron Fowler in presenting Bochy with a huge bottle of wine and some saltwater fishing rods.

Bochy was with the Padres for their first World Series appearance in 1984 -- getting a hit in his only at-bat -- and managed them to the World Series in 1998, when they were swept by the New York Yankees.

Bochy was promoted from third base coach to manager with the Padres prior to the 1995 season and led them to four NL West titles and one NL pennant. The Padres haven't been back to the playoffs since 2006. After that season, Bochy was pushed out by Sandy Alderson and ended up with the division rival Giants.

"It's where I made my start in 1995," Bochy said. "A young general manager named Randy Smith took a chance on me and I'm forever grateful for that. We had some great times here. We got to the World Series in '98. That's a highlight. When we won the pennant, Trevor Hoffman threw the pitch that led to a fly ball to Steve Finley and we were into the World Series," he said, referring to the NL Championship Series win against Atlanta.

"We got some division titles here. Didn't quite get the championship but had some great memories with a lot of great players, who I still have really good relationships with. No question there's a ton of memories here, including this ballpark. I started at Qualcomm/Jack Murphy. It's nice to be part of what was built here."

Two weeks after the Padres lost the 1998 World Series, voters overwhelmingly approved construction of Petco Park. It opened in 2004.

Former Padres outfielder Alex Dickerson, who grew up in Poway, is now with the Giants and has contributed to their resurgence.

Dickerson grew up a Padres fan in Poway. He said he remembers Bochy for the bushy mustache he used to have.

"The mustache really sticks out," Dickerson said. "But he had those great teams, especially that 98 team. I got to go to the World Series at Qualcomm Stadium. I was in the last seat next to the speakers and I got my eardrums blown out. A lot of fond memories. I'm really excited as a former fan to see this sendoff they're going to have for him today."

Getting to play for Bochy has been "awesome," Dickerson said. "It's just one of those full-circle things. You grow up watching your local manager coaching the Padres and fast-forward and you're playing for him in his last season. It's a pretty cool feeling."

Dickerson said he lives about 10 minutes from Bochy in Poway. "It's not the nicer side of town," he added.