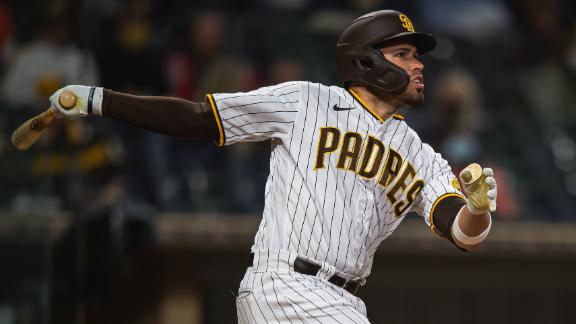 The Padres won a few hours after getting the news that star shortstop Fernando Tatis Jr. is expected to avoid surgery for now for a partially dislocated left shoulder. Tatis was placed on the 10-day injured list and the Padres didn't set a timeline for his return.


"The strength of this team is that everybody does their job really well and we help each other," Darvish said about playing without the electrifying Tatis.

Caratini's first homer with San Diego was a two-run shot to right field off Matt Wisler (0-1) with one out in the seventh to break a 1-all tie. South Korean rookie Kim Ha-seong, who started at shortstop in place of Tatis, was aboard on a walk.

"Coming over, I knew he was a good player. He's a lot better than what we even expected," manager Jayce Tingler said about Caratini.

Caratini is Darvish's personal catcher. They were obtained from the Chicago Cubs on Dec. 29, the same day the Padres also acquired Blake Snell from the Tampa Bay Rays.

"Every time he hits a home run he kind of comes to me with a grin, so I don't really like that. Jokingly, obviously, but it was good for the team, so I think it makes it OK," Darvish said.

Darvish allowed one run and three hits while striking out seven and walking one. He left with the score tied at 1 and failed to get a decision for the second straight start. He wasn't eligible for the win on opening day, when he exited after 4 2/3 innings in San Diego's 8-7 victory against Arizona.


"They understand the game plan and are thinking along with each other. It certainly helps having Caratini back there with him. He knows how to put down all seven or eight signs, all the pitches Darvish throws," Tingler said.

Keone Kela (1-0) pitched a perfect seventh and Mark Melancon worked a 1-2-3 ninth for his third save. The Padres retired the final 13 Giants batters.

Darvish allowed Brandon Crawford's homer to right-center leading off the third, his first.

San Diego tied it in the bottom half on Eric Hosmer's RBI single.


Giants: 2B Tommy La Stella was a late scratch from the starting lineup with tightness in his upper back but pinch-hit in the eighth. Wilmer Flores replaced La Stella at second and Mike Yastrzemski moved up a spot to bat leadoff.

Padres: Tatis underwent an MRI that showed labral tearing in his left shoulder and the team feels rest and rehab are the best course of action. General manager A.J. Preller said the Padres don't think they'll be putting Tatis at risk if he continues to play this season. Tatis was injured taking a hard swing while striking out in the third inning Monday night.

Giants: RHP Kevin Gausman (0-0, 1.35 ERA) is scheduled to start the series finale. He had a terrific opening day outing, allowing only one run while pitching into the seventh, but got a no-decision after the Mariners rallied for an 8-7 win.

Padres: Snell (0-0, 0.00) is scheduled to make his second start with the Padres and is looking for his first win after being pulled following 4 2/3 scoreless innings in a 4-2 win against Arizona on Friday.