Chris Paul: It was about a bad call 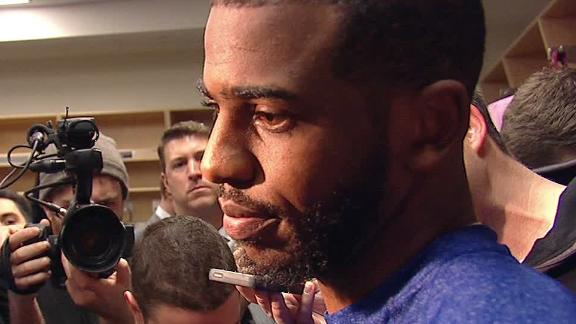 "Without hesitation, the Players Association stands firmly behind Chris, whose competitiveness may only be exceeded by the strength of his values and his conviction," Roberts said in a statement.

On Friday, Paul repeatedly said it was "a bad call" that prompted him to criticize Holtkamp's officiating Thursday night -- nothing more.

"Last night was about a bad call. That's all," Paul said prior to the Clippers' 123-107 loss to the Toronto Raptors. Paul repeated his answer twice more upon being questioned about it before a team official asked reporters to move on to basketball-related questions.

The eight-time All-Star found himself embroiled in controversy after getting upset that he was given a technical foul by Holtkamp in the third quarter of his team's 105-94 loss to the Cleveland Cavaliers on Thursday. With 10:17 left, he tried to catch an inbounds pass quickly but instead was T'd up after questioning Holtkamp, who became the third woman to referee NBA games full time this season.

"I think we have to show better composure, but at the same time, some of [the technical fouls] were ridiculous," Paul said Thursday. "The tech that I get right there was ridiculous. I don't care what nobody says, I don't care what she says; that's terrible. There's no way that can be a tech. We try to get the ball out fast every time down the court, and when we did that, she said, 'Uh-uh.' I said, 'Why, uh-uh?' And she gave me a tech.

"That's ridiculous. If that's the case, this might not be for her."

Clippers coach Doc Rivers did not like how Paul reacted but said Friday it was not an issue of gender.

Paul also was supported by Becky Hammon, the former WNBA star who was hired by the San Antonio Spurs last year as the first full-time female assistant coach of an NBA team.

"Chris Paul is a competitor & he had an opinion, I don't think it had anything to do with the refs gender," Hammon wrote on Twitter.

Roberts issued the statement Friday afternoon, backing Paul, the president of the NBPA.

"Any suggestion that Chris Paul would ever conduct himself in a disrespectful manner towards women is utterly ridiculous, outrageous and patently false," Roberts said. "His personal management team, which includes several accomplished women who play a major role in virtually all of his business affairs is, alone, evidence of that fact.

"The Players Association is a strong Exhibit B. Anyone paying attention is aware that Chris and his executive committee colleagues were instrumental in making me the first woman executive director of a major men's professional sports union. Further, Chris and the committee were nothing but wholly supportive of my recent hire of Chrysa Chin -- a woman -- as the NBPA's first ever executive vice president of strategy and development."

"The NBRA has carefully reviewed the calls made by Lauren Holtkamp and deems them fully justified," NBRA general counsel Lee Seham said in a statement. "Furthermore, the NBRA deplores the personal and unprofessional comments made by Chris Paul. She belongs."

Sources close to the situation told ESPN.com's Marc Stein that Paul's comments are under league review, but one source stressed that the review was triggered per normal protocol, as the comments were critical of officiating.

Before working for the NBA, Holtkamp had six seasons of NBA D-League experience, including work in the 2013 and 2014 D-League Finals. She also has refereed in the WNBA, college and FIBA ranks.

She is one of two current full-time female officials in the NBA, along with Violet Palmer. Dee Kantner is no longer with the league.

Arash Markazi and Marc Stein of ESPN.com and The Associated Press contributed to this report.

CP3 On Postgame Comments
Chris Paul responds to his comments about a referee's call from Thursday's night game between the Clippers and the Cavaliers.

Chris Paul Critical Of Female Rookie Referee
Chris Paul reacted to the officiating in the Clippers' loss to the Cavs.