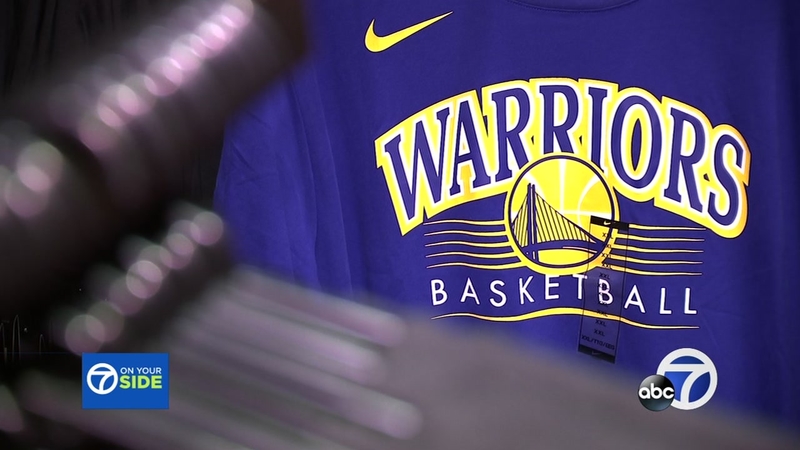 Bob Lemmonds was buying T-shirts for his 13-year-old son. "I am a Celtics fan, die hard Celtic fan," he told 7 on Your Side's Michael Finney, "But my son loves the Warriors, absolutely loves Steph Curry, so we couldn't be happier that they are in the finals, again."

All the gear in the Warriors team store is on the up and up, but there are plenty of fakes out there. Last year during the NBA Finals, a team of undercover Homeland Security agents found fakes at pop-ups around Oracle Arena. One of the agents picked up a cap and told our ABC7 reporter, "That's counterfeit. Right there, you can't even read that as 'NBA.'"

To gauge what is happening this year, Michael Finney spot-checked all the usual places, looking for pop-ups selling counterfeit gear. He didn't find anything.

"Maybe we scared them away," says Michael Potenza, Vice President and intellectual property counsel for the NBA. "That would be nice, but I think we will see them come next week."

Potenza says when the Warriors return home, the counterfeiters will be right behind with knockoffs that are often poorly made. He says those who buy the fakes should know their money could end up in the hands of criminals.

"You go up further up in the chain of these counterfeit operations," he tells me, "there are some pretty unsavory characters."

Besides that, if you are a real fan, don't you want the real stuff?

"I used to buy counterfeit stuff," Robert Dimery told Michael Finney, "On the street because it is so much cheaper and it looks so authentic, but then as you get older you get tired of wearing cheap stuff."

At the Warriors' San Francisco team outpost, Andrew Cheng said, "They're real fans, they like to wear what the players wear."

When shopping, the best way to know you are getting official gear is to buy from the Warriors team store or website and at other major retailers. When checking the merchandise in person, look closely at the NBA tag. There should be a hologram. If you look very closely, you can actually read "Spalding" on the tiny basketballs.