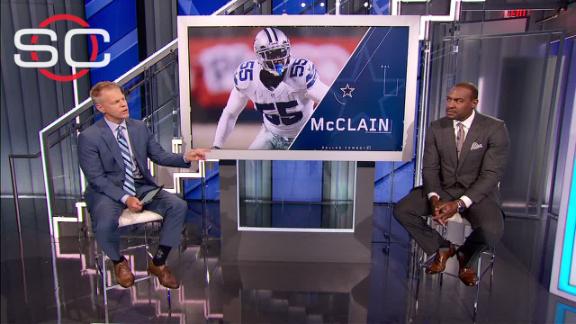 OXNARD, Calif. -- Dallas Cowboys linebacker Rolando McClain was not on the team's charter flight to California on Thursday, and he had until 2 p.m. PT Friday to report to training camp or be subject to a fine, if not worse.

The Cowboys have not released McClain, who is set to be suspended the first 10 games of the season due to violating the league's substance-abuse policy.

"We'll talk about that stuff later," he said after signing autographs for military personnel at Naval Air Station Pt. Mugu after the team's arrival.

Speaking to reporters on Wednesday, Stephen Jones said of McClain's status: "That's another one that's a work in progress. We'll leave it at that."

The Cowboys re-signed McClain to a one-year deal worth as much as $5 million earlier in the offseason. He received a $750,000 signing bonus.

If the Cowboys cut him, he would cost $750,000 against the cap, but the Cowboys would gain roughly $2.6 million in cap room due to his $1.25 million base salary and $1.375 million in per-game roster bonuses. It would also be possible to earn a cap credit in 2017 for part of McClain's signing bonus.

McClain did not participate in the organized team activities and missed most of the voluntary offseason program. He reported to the mandatory minicamp in June but did not practice because he was not in good enough condition.

McClain joined the Cowboys in a trade from the Baltimore Ravens in 2014 after Dallas lostSean Lee to a season-ending injury in the offseason. In 12 games, McClain was credited with 108 tackles by the coaches to go along with a sack, nine tackles for loss, two interceptions and a forced fumble.

He missed the first four games of last season because of a substance-abuse suspension. In 11 games, he was credited with 97 tackles, two sacks, nine tackles for loss and an interception.