Danny Duffy to miss next start 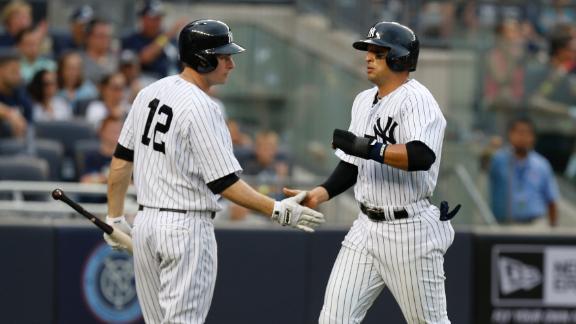 Duffy threw one pitch Saturday before being removed from a game against the New York Yankees because of left shoulder soreness.

"He has rotator cuff inflammation and will require three, four days' rest before being re-evaluated," Moore said. "He will not make his next start."

Duffy underwent an MRI and examination in Kansas City.

He reacted awkwardly after throwing a 91 mph fastball to Yankees leadoff man Jacoby Ellsbury, prompting Kansas City catcher Salvador Perez to motion for manager Ned Yost and the trainer to come out of the dugout.

"I sat for five minutes before I got back out to the mound, and it just tightened up for whatever reason," Duffy said. "It felt like I had a vice grip on my shoulder."

Duffy, 25, has been a major contributor in Kansas City despite his 8-11 record. His 2.42 ERA is third best in the American League behind Chicago's Chris Sale and Seattle's Felix Hernandez. Duffy ranks sixth in the league with a 1.08 WHIP and is second to Hernandez with 6.50 hits allowed per nine innings.

"I do not think this is going to end my season," Duffy said. "I am important to this team, and I am going to do everything I can to get back out there."

Kansas City's rotation -- which has consisted primarily of James Shields, Jason Vargas, Yordano Ventura, Jeremy Guthrie and Duffy -- is fifth in the league with a combined ERA of 3.53.

Information from ESPN.com's Jerry Crasnick was used in this report.

Yankees Break Out Against Royals
Danny Duffy exited with shoulder soreness after throwing just one pitch in the Royals' 6-2 loss to the Yankees.