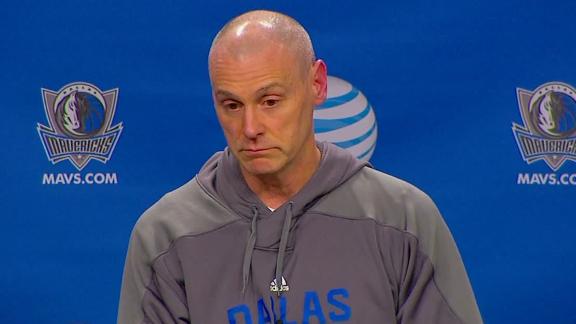 DALLAS -- Mavericks coach Rick Carlisle, the president of the NBA Coaches Association, expressed shock and disappointment over the Cleveland Cavaliers' firing of David Blatt on Friday.

"I'm embarrassed for our league that something like this can happen like this," Carlisle said. "It's just bizarre. ... It just leaves you with a bit of an empty feeling, because Blatt's a great guy, and he did a great job there."

Carlisle referred to Blatt as "one of the best coaches in history" based on his success in Europe and international basketball. He praised Blatt for successfully adapting and adjusting to the NBA game after spending his entire career coaching overseas.

"Teams have the right to make changes, but David Blatt is going to be a highly sought-after coach this summer if and when there are openings, if he chooses to stay," Carlisle said. "After this, you just hope a guy like this is still open to coaching in the NBA."

NBA coaching sources told ESPN's Marc Stein that Blatt is intent on coaching in the league again as opposed to immediately returning to the European game.

The Mavs let go of Avery Johnson after their first-round exit in the 2008 playoffs despite his 194-70 record in three-plus seasons, a .735 winning percentage that at the time was the best in NBA history. Johnson coached the Mavs to the 2006 Finals in his first full season as coach, but Dallas failed to close out that series after winning the first two games and lost in the first round the next two seasons.

The Mavs replaced Johnson by hiring Carlisle, who was fired from his first head-coaching job after back-to-back 50-win seasons with the Pistons.

"I've always said hiring a coach is the hardest thing to do in the NBA," Mavs owner Mark Cuban said after Blatt's firing. "Fortunately, I put a ring on it. I think we're good for a while, but we've been in a situation where we had a coach who had a lot of early success, and it wasn't just on-the-court record that mattered. So without knowing all the details, it's hard to really say anything.

"The guy who writes the checks always wields the most power. And it's always in their hands to make the decisions, no exceptions."

Carlisle, who signed a five-year contract extension earlier this season, said he wasn't familiar with the internal workings of the Cavs and couldn't comment about the cause of Blatt's firing. He did speculate that Blatt actually could benefit from leaving Cleveland.

"The other side of it is, a good man perhaps has been liberated and is now going to have some great options," Carlisle said. "He'll find a much better situation here if he wishes to, and a guy like him deserves that."