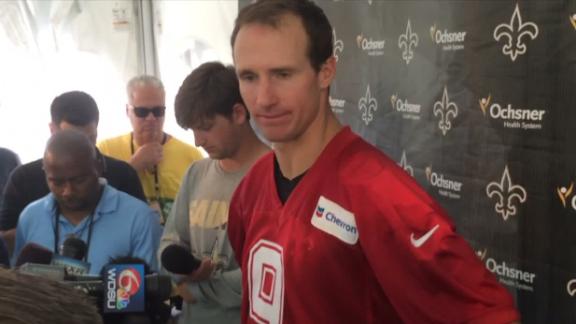 WHITE SULPHUR SPRINGS, W.Va. -- Drew Brees' age might be a sticking point in his contract negotiations with the New Orleans Saints. But the 37-year-old quarterback insisted Thursday that he can keep playing at a high level into his 40s, "without question."

"I don't see any reason why I can't play at the highest level for the next five years. Minimum," Brees said.

"Listen, I'm not nave and I'm not looking five years from now. I'm really looking at each and every year understanding I gotta prove it. I gotta prove that I'm the best guy to lead this team. But, yeah," Brees said. "I mean, it doesn't get any easier. But I feel like with my training regimen and with the people I have around me and the things that we're doing to put myself in the best position to succeed ... I don't see any reason why I can't do this beyond five years from now.

Brees wasn't directly talking about his next contract extension when he made those comments. The two topics, however, are related because he is heading into the final year of his current deal -- and the amount of guaranteed money in his next contract could be one of the greatest sticking points.

Brees and Saints general manager Mickey Loomis both acknowledged this week that talks haven't progressed in months. Brees reiterated Thursday that he won't discuss his contract during the regular season, so, "if there's a time to do it, certainly now would be the time."

When asked if he feels like this should be easier, based on his years of service and relationship with the organization, Brees said, "Uh, I would hope so" and laughed.

"But I also know sometimes these things take time," said Brees, who stressed, "Just to clarify, nothing is adversarial. I've got a great relationship with Mickey Loomis and have for my entire time here. And this is just that part of the business, let's call it."

Brees also insisted it won't be a distraction -- especially now that the Saints are back on the practice field, having completed their first training camp practice on Thursday.

"Honestly, that's really the last thing on my mind," Brees said. "I'm all about football, I'm all about getting myself and this team ready to have a great season. And I think that will take care of itself when the time comes. But as for now, I'm just focused on training camp."

Brees said he also doesn't believe it will be a distraction for any of his teammates.

"Only if you guys make it a big deal," Brees told the media with another big laugh. "I think we all have enough on our mind and on our plate right now in regards to making this team and filling a role and just watching this whole thing come together right now. I think everybody's excited about that.

Naturally, all of Brees' teammates who were asked if they pay any attention to his contract talks said no on Thursday. Veteran right tackle Zach Strief insisted they're not lying -- both because they have other things to worry about and because they're confident in Brees' ability to compartmentalize.

"Look, he's a highly competitive and highly professional guy that is way more worried about the fact he threw an interception in seven-on-seven than he is about a contract right now," Strief said. "And that's just how Drew is. Like, to a fault, he's like focused in everything. Everything he does is unbelievably focused.

"He's like a weirdo. So I don't have any doubt that Drew can't put that out of his brain while we're playing and practicing, and that's what's important.

"He knows the offense better than anybody in the building, hands down. And I would include coaches in that. I think Drew has a better handle on it than everybody at this point. And, look, I don't care if it's a distraction for Mickey Loomis. He's doing fine, I'm sure."
Related topics:
sportsespnnew orleans saintsnflzach striefcontractdrew breesage
Copyright © 2022 ESPN Internet Ventures. All rights reserved.
TOP STORIES
LIVE: Funeral for Alameda Co. sheriff's recruit killed on I-580
EXCLUSIVE: Woman shoved to ground in Oakland's Chinatown speaks out
Health experts believe Bay Area has already reached omicron peak
LA Rams ban ticket sales to 49ers fans in Bay Area
After the omicron wave, what's next for the COVID pandemic?
Amy Schneider details historic 'Jeopardy' run on 'GMA': VIDEO
4 wounded in shooting in Germany; gunman dead
Show More
North Bay anti-vaccine activists protest mandates
COVID-19 updates: Conditions 'ideal' for more variants WHO warns
Justices to hear challenge to race in college admissions
Colorado Fire in Monterey Co. now 700 acres, 35% contained
Families reflect on the 2 years since 1st COVID case in US
More TOP STORIES News