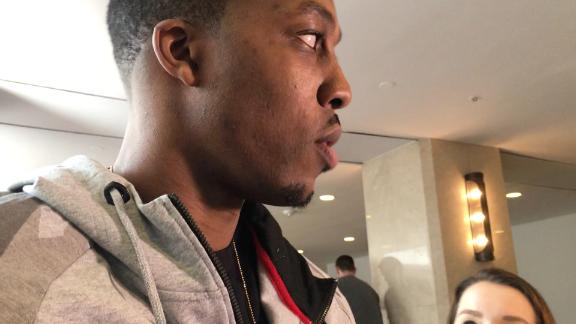 HOUSTON -- Dwight Howard said he wouldn't mind if Rockets fans booed him Thursday night, explaining that there was "never any love lost" for Houston and calling his departure last summer in free agency "a business decision."

But Howard, now playing with the Atlanta Hawks, received a mix of boos and cheers during pregame introductions. The boos got louder as he scored on his first four buckets on dunks. In the end, though, it didn't matter, because the Hawks defeated the Rockets 113-108.

"I didn't really think about it like that," Howard said afterward about returning to Houston. "It wasn't like, 'Oh, we've got to beat Houston because this is my first time back.' I just knew we needed to win.

"After [Wednesday's loss in Miami] we needed this one. We got our butts kicked last night, and I knew it wasn't going to be easy here in Houston, but this one felt good."

Howard finished with 24 points and tied his season high with 23 rebounds. It marked Howard's 47th career 20-20 game, giving him 31 more than any other player since he entered the league in 2004-05.

Atlanta rallied from a 20-point deficit in the final 8:27 of the game, going on a 30-9 run to take a 107-106 lead. The Hawks became the first team to overcome a 20-point deficit in the fourth quarter of a regular-season game since Indiana did it against Cleveland in 2013. Entering Thursday, teams lost 1,306 consecutive regular-season games when down by 20.

"I've been a part of some really good games," Howard said. "This was up there. It was just the intensity that we had on both ends of the floor. The intensity and the mental capacity to lock in and focus on certain things."

In Howard's three seasons in Houston, the Rockets reached the Western Conference Finals in 2015 and were eliminated in the first round of the playoffs by the Portland Trail Blazers in 2014 and the Golden State Warriors in 2016, when the Rockets went 41-41 and snuck into the postseason as an eighth seed.

"I thought, besides the last season, I thought we had some successful seasons," Howard, speaking before Thursday's game, said of his time in Houston. "Went to the West finals, which hasn't been done since Hakeem Olajuwon. I thought we had some success. I know it didn't end the way we all wanted it to end -- that's the NBA, and you have to move forward. Houston is having a great year this year, and our team is also having a great season, and it will be great if both teams ended up in the finals."

Howard said the reason he signed a free-agent deal with the Rockets was to play with James Harden, who he said is having an outstanding year. But things changed last season, with the chemistry between the two appearing to falter, and Howard decided he wanted to play elsewhere, signing a three-year, $70.5 million deal with the Hawks.

Howard won the first meeting against his former team in November, and things went smoothly when he visited the Rockets' locker room before Thursday's game. Howard gave Harden a hug and briefly spoke with Patrick Beverley, Corey Brewer, K.J. McDaniels and Clint Capela.

After the game was over, Howard, as is his custom, gave away his jersey to a fan near the visitor's tunnel and was greeted warmly.

Howard gets booed in return to Houston in win
Prior to the start of the Hawks vs. Rockets, Dwight Howard hears chants of boos as his name gets called during team introductions.