Former WR Ty Montgomery to remain at running back for Packers 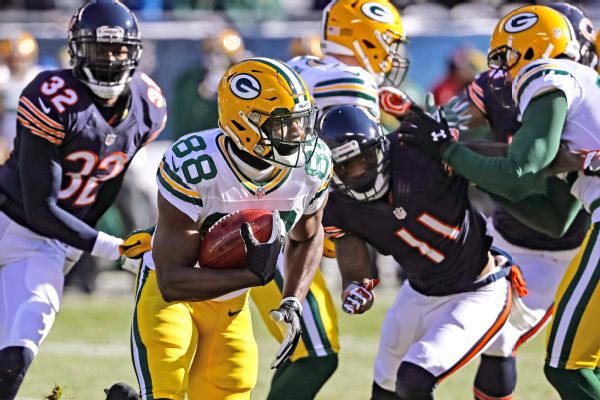 The former wide receiver is a running back to stay and will have a new number next season, Green Bay Packers coach Mike McCarthy said Thursday.

McCarthy said Montgomery expressed the desire to remain at that position when the two met this week during player-exit interviews, following the season-ending loss Sunday to Atlanta in the NFC Championship Game.

"He's a running back, so he wants to change his number and that's the way we're going," McCarthy said. "So he'll spend the whole offseason clearly working at the running back position. Obviously, the ability to flex out and play receiver and those types of things will be his secondary responsibility. But he'll be on the depth chart as a running back."

The Packers dabbled with Montgomery in the backfield during training camp last summer but had no plans to convert him from receiver full time until injuries sidelinedEddie Lacy and James Starks early in the season.

Montgomery led the Packers in rushing with 457 yards on 77 carries -- an average of 5.9 yards per carry -- but it wasn't until Week 7 against the Chicago Bears when the former second-round pick from Stanford was unveiled as a full-time running back. Montgomery's best game came in the Week 15 at Chicago, where he rushed 16 times for 162 yards.

"By no means did I think Ty Montgomery was going to be playing halfback and be there by himself against the Chicago Bears, but you have to be prepared for that," McCarthy said.

Montgomery's role next season could depend on whether the Packers re-sign Lacy, who will be a free agent in March. Lacy still has not recovered from the ankle surgery that landed him on injured reserve. Before his injury, Lacy was off to a strong start, averaging 5.1 yards per carry through the first five games of the season.