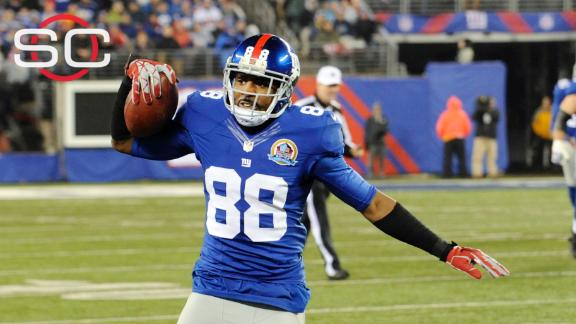 As Cruz goes on injured reserve with a calf injury, the Giants are bringing back his old friend and mentor.

"This is home," Nicks said in comments distributed by the team. "You know what they say, 'Let a dog roam, he'll find his way home.' They left the backdoor open for me."

Nicks, who is still just 27 years old, was a key contributor to their Super Bowl XLVI title team.

His past few NFL seasons, however, have not gone well. Nicks had 56 catches for 896 yards and zero touchdowns for the Giants in 2013, and the Giants did not re-sign him after that year.

Nicks caught just 38 passes for 405 yards and four touchdowns last season after signing a one-year deal with the Indianapolis Colts.

He spent training camp this year with the Tennessee Titans but was among the final cuts and has worked out for several teams since.

"I'm happy to be here, happy to be back in the building," Nicks said. "I feel great, I feel hungry. I'm ready to get on that field and make some plays."

How Nicks fits with the Giants remains to be seen, especially since he's taking the roster spot of a player who's been inactive for all 10 games so far. The Giants like Odell Beckham Jr. and Rueben Randle as their starting wideouts, and Dwayne Harris has played well in Cruz's slot receiver role.

Nicks likely provides some veteran insurance and, if active on game days, could take the spot of someone like Myles White.

The Giants' offense is different from the one they ran when Nicks was there from 2009 to '13, but the surroundings will be comfortable and familiar. Nicks does have pedigree and is familiar with quarterback Eli Manning.