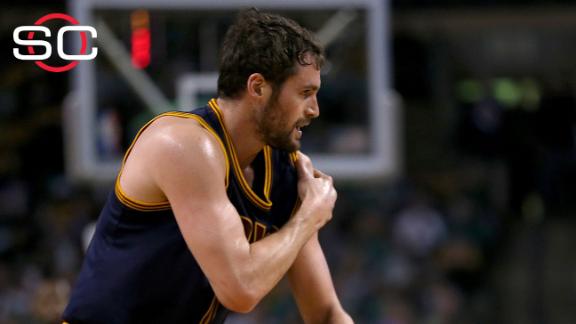 INDEPENDENCE, Ohio -- The Cleveland Cavaliers are mentally preparing themselves to be without Kevin Love for the remainder of the postseason, with general manager David Griffin saying Tuesday it is "highly unlikely" that the All-Star forward returns.

"The damage to his shoulder is extensive," Griffin said of Love, who dislocated his left shoulder in the Cavaliers' close-out win over the Boston Celtics on Sunday. "This is not a situation where we are expecting that he will be available for any of (the rest of the postseason), and we are in the process of gathering information and seeing what the exact right next steps are, and every option is on the table. Surgery is an option as well, if necessary. We're going to continue to look at that, but I don't want there to be any expectation on Kevin that he'll be back."

The Cavs initially ruled Love out for their upcoming Eastern Conference semifinals series -- they face the Chicago Bulls-Milwaukee Bucks winner starting Monday in Cleveland -- but Griffin said the possibility of Love suiting up for another game this season is remote at best.

"I think it would be a real surprise if he were able to participate in the postseason," Griffin said. "I've still got a sliver of hope very late, but highly unlikely."

"Obviously, he brings so much to our team offensively and defensively," James said Tuesday. "It's a big blow for us. We've got to have guys step up."

Love, playing in his first postseason as a pro, was hurt when he got tangled with Celtics forward Kelly Olynyk while chasing a loose ball in the first quarter Sunday. Olynyk clamped down on Love's arm and pulled so hard that it popped out of the shoulder joint.

Love underwent an MRI and other tests Monday. His injury is officially listed as an acute anterior inferior glenohumeral dislocation with the corresponding ligament/labrum tearing and humeral head bone bruising.

Love called Olynyk's actions "bush-league" after Sunday's game and said he thought they were intentional.

"There's a level of physicality and aggressivity that you see, that I defined as 'playoff basketball,' and I think there's also a limit," Cavs coach David Blatt said. "And I thought that line was crossed on more than one occasion."

The Cavs are accepting the reality of not having two of their starters when they begin the second round.

Love can opt out of his current contract this summer to become an unrestricted free agent. Griffin, however, expressed confidence that Love will remain in Cleveland.

"We were playing at a tremendous level and getting the full extent of Kevin, so it's very difficult to have that taken away from you," Griffin said. "At the same time I think he realizes we're set up to potentially be pretty good in the future, and he's excited about being part of that, too."

James was also asked if he has spoken to Love about the possibility of him staying with the Cavs.

"That's a question that I can't answer right now," James said. "I think that's the last thing on his mind right now. What's on his mind is his shoulder and how disappointed he is, how hurt he is over the fact that he can't play in this postseason. I don't think he's thought about the offseason or what he wants to do. I haven't had that conversation with him, and I shouldn't have to have that conversation with him, especially right now when we're going through this challenge and this battle of trying to win a championship. So I can't answer that question."

This is hardly the first adversity the Cavs have faced this season. Their campaign has seen everything from two roster-transforming trades in January and rumors about Blatt's job security to player bickering and an underwhelming 19-20 start.

"Our guys have been locked in for quite some time now," Blatt said. "I think everyone recognizes that we all have to pick it up. The next-man-up mentality is prevalent in our work and our feeling. We're hurting for what happened to Kev on a team level, on a personal level, but not discouraged to the point where we are any less ambitious and any less hungry to continue on this path."

After entering the playoffs as the Las Vegas favorites to win the NBA title, the Cavs are now embracing an underdog persona.

"Suffice it to say I'm really happy we get to go from being the hunted to the hunter," Griffin said.

Love injury a big blow to Cavaliers
Dave McMenamin reports from Independence, Ohio, where the Cavaliers will have to cope with the loss of Kevin Love, who is unlikely to return this postseason.

Love injury diminishes Cavs' championship hopes
P.J. Carlesimo explains how integral Kevin Love is to the success of the Cavaliers and how his absence will impact the team's hopes of winning a title.