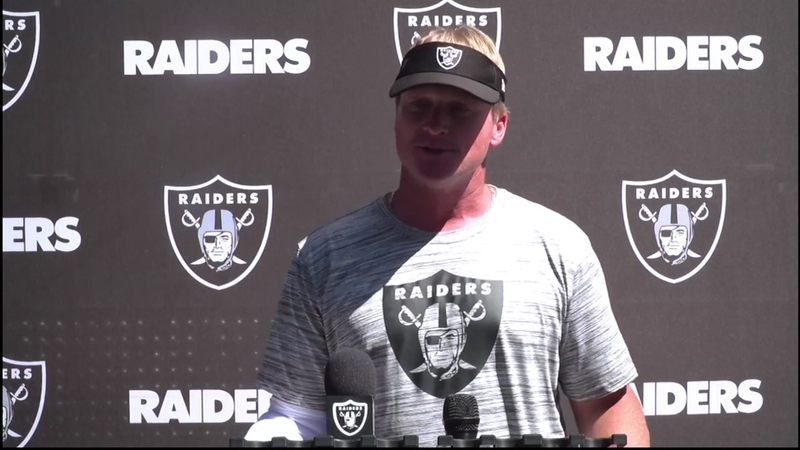 OAKLAND, Calif. (KGO) -- The new-look Oakland Raiders kickoff the season at 7 p.m. Monday night on ABC7, and the center of attention will be head coach Jon Gruden.

It's fitting that the Gruden era returns on Monday Night Football, where he spent the past nine seasons in the ESPN broadcast booth. He signed a 10-year, $100 million deal this offseason to rejoin the Raiders.

He's excited to be back on the team.

"I'm just as excited to get the butterflies, you know? It's the same way every year, especially opening day, it's special. This is really special for me. I know there's been a lot of news this week with what has happened, but uh, I'm going to do everything I can to try to bring the Raiders back, and I really like the effort our team has put forth," Gruden said during a press conference.

Gruden will be looking to win his third straight home opener as head coach of the Raiders. The other two came during his first tenure with the team. The raiders are facing the Rams in a season opener for the first time since 1979.

ABC7's pre-game coverage of the home opener begins at 7 p.m., with kickoff starting at 7:20 p.m. And be sure to catch "After the Game" with Larry Beil and Mindi Bach following the season opener.

Programming Note: Due to bringing you the Raiders-Rams Monday Night Football game, "Bachelor in Paradise" will air in its entirety overnight starting at 1:05 a.m. "Jeopardy!" and "Wheel of Fortune will be pre-empted and will not run overnight.