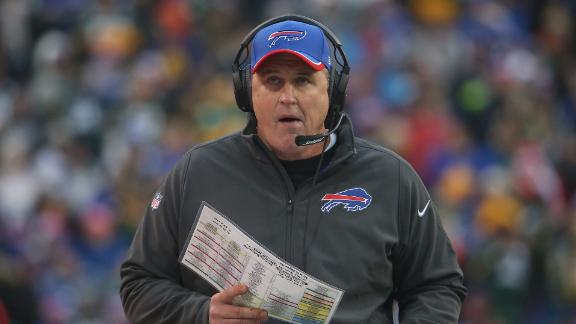 "Any time you get a text message saying that it's happening, you feel like you got punched in the stomach," Jackson said during his weekly appearance on WGR 550 in Buffalo. "I mean, stuff could have been handled different. We don't ... we all weren't in the room and understand what went down."

Jackson, a team captain and one of the Bills' most tenured players, added that players must now "move on" after Marrone exercised an opt-out clause and terminated his contract.

Marrone reportedly sent a mass text to his players after the news of his opt-out was announced, telling them to call him if they had any questions.

"It's the unfortunate part of the business," he said. "Everybody makes decisions that best suits them. For us, we're not going to dwell on what he decided to do."

The New York Jets interviewed Marrone on Sunday, but Jackson downplayed the effect of Marrone potentially jumping to a division rival.

"No, he's just gonna be another guy," Jackson said. "Obviously, we'll want to beat him when we play him. But it's not going to fuel or motivate us in any different capacity. He's just another guy now. He's not somebody that we're worried about what he's doing."

The Bills have requested interviews with several head-coaching candidates in the past several days, with owner Terry Pegula and general manager Doug Whaley involved in the search.

"[We] put all our faith in the Pegulas to get this thing fixed and get us a great coaching staff to come here," Jackson said. "Somebody that is here and wants to be here and we're excited to play for."