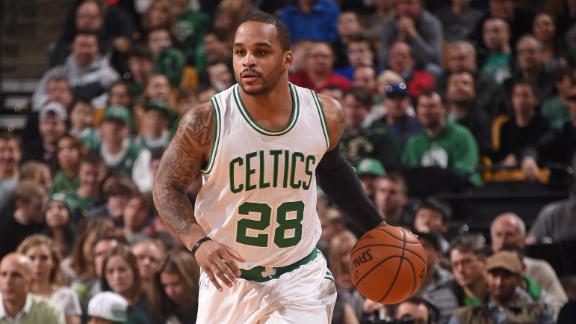 The Denver Nuggets and Boston Celtics swapped backup point guards Tuesday in a deal that could eventually affect some contenders.

Nate Robinson will be going to Boston, though it is expected to be a temporary stay as he is expected to seek a buyout of his contract with the intention of signing with a playoff team.

Jameer Nelson, who was sent to Boston as part of the Rajon Rondo deal, will be going to Denver.

Robinson, who is coming back from an ACL tear, is averaging a career-low 5.8 points on a career-low 35 percent shooting in 33 games for the Nuggets.

He was sensational in the playoffs for the Chicago Bulls in 2012-13 playing in place of an injured Derrick Rose, averaging 16.3 points in 12 playoff games.

Teams who may be interested in Robinson if he is able to secure a buyout include the Los Angeles Clippers and Cleveland Cavaliers.

Nelson played in just six games for the Celtics and is averaging a career low 6.8 points on a career-low 34 percent shooting in 29 games with theDallas Mavericksand Celtics.

He has a player option in his contract for next season for $2.8 million.

This is the second trade the Nuggets have executed in the last week as they begin to retool their roster. The Nuggets are involved in trade talks for other players includingArron Afflaloand Randy Foye, according to sources.