Jordan Spieth sets 54-hole Masters record at 16 under, up by 4 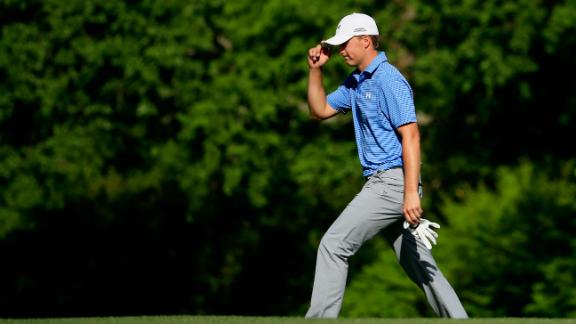 AUGUSTA, Ga. -- Jordan Spieth seized control of the Masters with a performance not seen since another 21-year-old, Tiger Woods, first blazed his way around Augusta National.

He made four birdies in five holes on the back nine to stretch his lead to seven shots. Standing on the 17th tee, he already was on the same score -- 18-under par -- that only Woods had ever reached in the Masters.


And then it all changed Saturday in two holes.


Out of nowhere, Spieth made a double-bogey. Ahead of him, former U.S. Open champion Justin Rose poured in a 20-foot birdie.


In the worst spot he had been all week, Spieth ended 30 minutes of chaos with a bold shot that saved his par, set another Masters scoring record and gave the 21-year-old Texan a 4-shot lead over Rose going into the final round.


On a day of charges and endless cheers for the biggest names in golf -- Woods,Rory McIlroy and Phil Mickelson-- Spieth now gets to return and do this all over again.


It might have felt even longer without one last display of his exquisite short game. Spieth put his approach on the 18th into the gallery, right of the green, behind a bunker with the green below and running away from him. He took the high-risk option that offered his best chance to save par -- a flop shot off a tight lie -- and pulled it off to perfection.


"That just took some guts," Spieth said. "And having been in this scenario, or having been in contention enough, having been on tour for a few years, I felt comfortable enough playing that full flop. If you caught me a year and a half ago, I probably never would have played that shot in that scenario.


Considering the shrinking size of his lead and the caliber of players behind him, Spieth might need them.


Rose closed with five birdies on his last six holes for a 67, and that birdie on the 18th put him in the final group for the first time in a major.


"Jordan was so far ahead that it was almost ... you were just playing your own game," Rose said. "It was nice to stay patient and get rewarded with a hot finish. It's amazing, and it put me in with a great opportunity tomorrow."


Mickelson wore a pink shirt in honor of Arnold Palmer because he knew he needed a big charge, and the three-time Masters champion delivered a 67, despite two bogeys on the back nine. Mickelson was 5 shots behind.


Woods and McIlroy will play together in the final round of a major for the first time -- and just second time in a major overall -- though both are 10 shots behind.

Both of them stalled at the end.McIlroy made bogey on two of the last three holes for a 68. Woods made a bogey from the bunker on the 18th for his 68.


For a short time late in the afternoon, Spieth made the green jacket ceremony seem like a formality.


Four shots ahead of Charley Hoffman, Spieth buried a 10-foot putt on the 12th hole and another birdie from about the same distance at the 13th. He followed a three-putt bogey on the 14th hole by making two more birdies, and his lead was up to 7 shots as the trees began casting long shadows.


He looked in total control at what is the most peaceful time of the day at Augusta National.


And then it was shattered. Spieth chipped weakly to the 17th green and three-putted for a double bogey.


It was a reminder how quickly comfort can vanish.A year ago, Spieth was on the wrong end of a 4-shot swing over two holes in the final round at Augusta. He went from a 2-shot lead to a 2-shot deficit and never caught up toBubba Watson.


"Last year definitely left a bad taste in my mouth," Spieth said. "I've been looking to get back, looking at trying to get some revenge."

The storyline should sound familiar -- a 21-year-old with a 4-shot lead going after his first major at Augusta National. Four years ago, that was McIlroy, who shot 80 in the final round. Now it's Spieth's turn, and he at least knows what to expect.


"I think the good thing for him is he's already experienced it once," McIlroy said. "He's played in the final group at the Masters before. It didn't quite happen for him last year, but I think he'll have learned from that experience. I think all that put together, he'll definitely handle it a lot better than I did."


Only one player in major championship history has rallied from 10 shots behind on the final day. That was Paul Lawrie at Carnoustie in the 1999 Open Championship, and Jean Van de Velde is nowhere to be found.