LeBron James: 'I'm here to win a team prize ... not an individual prize' 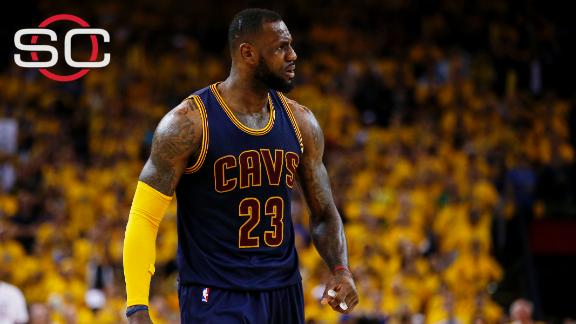 INDEPENDENCE, Ohio -- Should the Cleveland Cavaliers fail to dig themselves out of their 3-2 NBA Finals deficit to the Golden State Warriors, LeBron James would not find any consolation in the possibility that he still could be named series MVP in a losing effort.

"I wouldn't feel good about it at all," James said after Cavs shootaround in advance of Game 6 on Tuesday night. "Because at the end of the day, I'm here to win a team prize, and that's to win a championship, not an individual prize."

James is averaging 36.6 points, 12.4 rebounds and 8.8 assists in the Finals. Through the first five games of the series, he has registered two triple-doubles and three 40-point games.

His individual dominance, in the face of Cleveland playing without injured All-Stars Kevin Love and Kyrie Irving, has fueled the conversation that James could become the first Finals MVP on a losing team since Jerry West won it in 1969, when his Los Angeles Lakers lost to the Boston Celtics in seven games.

ESPN's Chris Broussard polled 50 league executives and coaches from the 28 teams not playing in the Finals; 31 said James should be the MVP even if the Cavs lose the series.

Dallas Mavericks star Dirk Nowitzki said he believes the MVP should come from the winning team.

"For me, it's got to be somebody from the winner," said Nowitzki, the 2011 Finals MVP after leading the Mavericks to an upset victory over James' Miami Heat. "That's how I always viewed the MVP, even though LeBron is playing from another planet and he's single-handedly keeping the series close. I've always believe the MVP has to come from the winner.

"Steph [Curry]has played amazing the last couple of games. Even Steve Kerr said [Andre] Iguodala has been their best player in the first four games. He's been phenomenal on both ends of the floor. So I'm sure you can find somebody from the Warriors if they pull through."

Information from ESPNDallas.com's Tim MacMahon was used in this report.

LeBron: Confident we can get the job done
Cavaliers forward LeBron James discusses the team's mindset as it prepares for Game 6 of the NBA Finals against the Warriors.