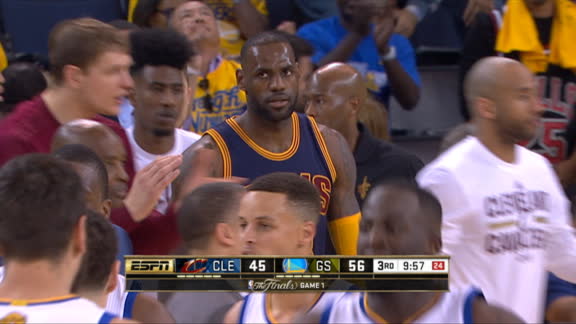 OAKLAND, Calif. -- LeBron James sat down on the bench in the fourth quarter as the game slipped away. He threw up his handsand grimaced in frustration.

His Cleveland Cavaliers had done everything right against the Splash Brothers. Yet everything still went so wrong as this highly anticipated NBA Finals rematch kicked off. The Cavaliers shot 38 percent and couldn't find a way to stop the Golden State Warriors' supporting cast in a 104-89 loss Thursday night.

"So, you know, nothing has really changed. They're a team that has another year under their belt, and they've exceeded what they did last year."

Steph Curry and Klay Thompsoncombined for just 20 points on 8-for-27 shooting, but the Warriors' bench outscored Cleveland's reserves 45-10 and the Cavaliers coughed up 17 turnovers that led to 25 points for the defending champions.

Curry and Thompson were 4-for-13 from 3-point range, and the two-time MVP turned the ball over five times, but the Cavs succumbed to a tide they never saw coming.

"For the most part, I'm pleased with what we did defensively against Steph and Klay," Cleveland coach Tyronn Lue said. "Their bench did a good job for them."

Kyrie Irving scored 26 points but shot just 7-of-22. Tristan Thompson had 10 points and 12 rebounds for the Cavs, who are trying to end a pro-sports championship drought in Cleveland that extends back five decades.

If the Cavscan't beat the Warriors when their biggest stars aren't raining 3-pointers, the Finals rematch everyone wanted could be over a lot sooner than most predicted.

But James knows this series is just getting started, andthe Warriors and raucous Oracle Arena became a little nervous when the Cavsjumped ahead in the third quarter while Curry and Thompson flailed away.

"We had a chance in that third quarter to do something special, but we didn't counter and do it," James said. "Didn't make it happen in the fourth quarter. So I'm looking forward to seeing the film session and seeing ways we can get better going into Game 2, and I think our team will as well."

All of the talk for the Cavaliers heading into the rematch was about the ability of Irving and Love -- two defensively deficient players -- to keep the high-scoring Warriors in front of them.

Curry and Thompson didn't have the field day that many expected, but the Cavs could never capitalize.

The Cavs threw everything they had at the two-time MVP, just as Lue said they would. James, Irving, J.R. Smith, Iman Shumpert, Matthew Dellavedovaall took a crack at Curry while Thompson, Love and the Cavs' bigs gave Curry forearm shivers and shoulder checks every time they had a chance.

Curry missed a wide-open 3 in transition later in the third quarter, and Golden State left the door wide-open for James and the Cavaliers.

"This was a strange game for us," Warriors coach Steve Kerr said. "We're not used to having both Steph and Klay off like that with their shooting."

Cleveland was second in the league in 3-point shooting this season, behind only Golden State. The Cavs hit just 7 of 21 shots from long distance on Thursday, struggles that often tell the tale of their chances to win.

They also struggled at the rim, with 28 missed shots from point-blank range.

Smith scored just three points in 37 minutes. Key reserve Channing Frye had just two points and was 0-for-1 from the field.

"The moment's here. We lost Game 1," Irving said. "Now we just have to recollect ourselves. In terms of being back here in Game 1, a lot of emotions, but now that Game 1's over, just ready to attack Game 2."

Game 2 is Sunday in Oakland.

James passed Larry Bird for 10th place on the NBA's postseason career rebounding list. He is the only player in the top 10 in playoff scoring (fourth), rebounding and assists (third). ... James went 2-for-4 on 3s, outshooting Thompson (1-for-5). James passed Robert Horry and is the career leader in 3s made in the Finals with 57. Horry has 56, and Ray Allen is third with 55.