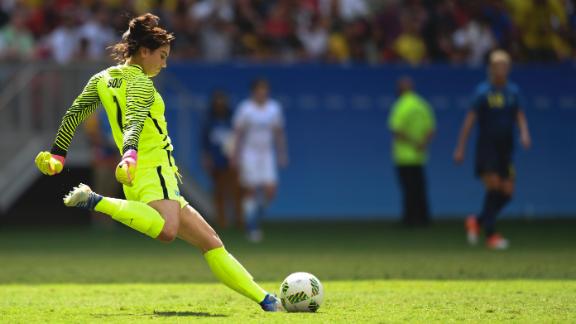 "Let's inspire, let's be badass, let's be fierce, let's be competitive. But we're gracious and we're humble, and we play the game a certain way, whether we win or lose," Rapinoe said.

"And we've been on the winning side quite a bit, and when we find ourselves on the other side, we need to handle that graciously, and unfortunately that wasn't the case."

Sweden ousted the U.S. 4-3 on penalty kicks following a 1-1 draw in a quarterfinal match. Sweden coach Pia Sundhage's strategy was to play defensively and try to keep the offensively adept Americans from scoring.

The tactic worked, but it angered Solo, the goalkeeper.

"We had that style of play when Pia was our coach. I don't think they're going to make it far in the tournament. I think it was very cowardly," Solo said after the match. "But, they won. They're moving on. And we're going home."

Sundhage used the same tactic in a semifinal match against Brazil, again advancing 4-3 on penalties after a scoreless draw. Sweden plays Germany on Friday in the gold-medal match at the Maracana Stadium in Rio.