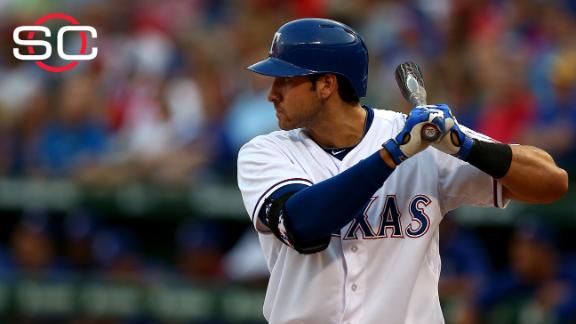 Call it the ultimate icebreaker.

There's no better way for a rookie to introduce himself to the world of Major League Baseball -- and, presumably, calm his own nerves -- than with a triumphant debut performance in the bigs. For some, it's a sign of greatness to come; for others, well, it remains their finest moment in the sun.

Baseball has had its share of notable debuts -- so many that we can only scratch the surface. Here are a few of our favorites.

Travis would go on to become an All-Star shortstop and third baseman for the Senators in a 12-year career cut short by World War II. But it was his performance in a 12-inning win over the Indians at Griffith Stadium that's still in the record books today: Travis, who finished 5-for-7 with three runs scored, is the only major leaguer in the modern era to stroke five hits in his first game. (Apparently, it was contagious: Travis was one of three Senators with five hits that day, and Washington finished with 27 base knocks overall.)

Spooner was a southpaw who would make just 31 appearances in his two MLB seasons, but he made his first one count. Facing the archrival New York Giants at Ebbets Field, Spooner tossed a shutout -- striking out an MLB-debut record 15 batters. It's a Day 1 mark matched just once in baseball history, by Houston Astros fireballer J.R. Richards in 1971. Spooner did have some help; the Giants, who had already clinched the pennant en route to winning the World Series that year, started many of their stars, including Willie Mays, but pulled most of them early in the game.

Here's a case of Hall of Fame foreshadowing. The 21-year-old McCovey got the first four hits, the first two triples and the first two RBIs of his legendary career in a 7-2 win over the Phillies at Seals Stadium. And he wasted no time after that, either -- even though he debuted in the Giants' 101st game, his 13 home runs, 38 RBIs and .354 batting average down the stretch earned him a unanimous Rookie of the Year award.

Lightning struck again for the Giants the very next season, when a 22-year-old Dominican righty debuted -- also against Philly, but this time at the brand-new Candlestick Park -- and completely dominated. Marichal, destined for Cooperstown, tossed a one-hit shutout, fanning 12 and walking just one.

It may not make many Top 10 lists of Yankees-Red Sox rivalry moments, but Rohr's first game came within one batter of being the undisputed greatest modern-day debut ever. Facing Whitey Ford's Yankees -- admittedly long after their heyday -- Rohr held the Bombers hitless at Yankee Stadium until there were two outs in the bottom of the ninth inning. Elston Howard singled to right to break up the no-no, but Rohr bounced back, retiring the next batter, Charley Smith, to end the game.

Woodard's debut, at County Stadium, was memorable enough for his eight innings of one-hit, one-walk, 12-strikeout, shutout baseball. But the fact that he outdueled that year's Cy Young winner -- Roger Clemens, who fanned 10 Brewers -- in a 1-0 victory made it about as remarkable a first-day achievement as they come.

Jennings put together a debut of Ruthian proportions. Not only did he silence Shea Stadium with a shutout, but he led a 10-run Rockies attack with a 3-for-5 performance at the plate, including, for good measure, a ninth-inning home run.

Castro's first game, one of several highly anticipated Cubs debuts in recent years, featured a three-run home run in his first MLB at-bat and a bases-loaded triple. That added up to an MLB debut-record six RBIs in a 14-7 shellacking of the Reds in Cincinnati.

Speaking of hyped-up call-ups in recent years, Strasburg's debut, in front of 40,000 fans at Nationals Park, lived up to expectations. Strasburg struck out 14 Pirates in seven innings of work, his only blemish a two-run Delwyn Young homer in the fourth.

Nava isn't the only player in baseball history (or even on our list) to hit a home run in his first at-bat, but the way he went about it earns him a spot here. During a 10-2 Boston win, Nava launched the very first pitch he ever saw, from Phillies starter Joe Blanton, into the Red Sox bullpen at Fenway Park -- for a grand slam.

Nuxhall got shelled by the Cardinals at Crosley Field -- to the tune of five earned runs, two home runs and five walks in 2/3 of an inning. OK, so it was kind of a nightmare. But Joe had a pretty good excuse: He was just 15 years old, the youngest player ever to appear in a big league game. Although Nuxhall got such an early shot because of World War II, he had enough stuff to return to the majors in 1952 and continue pitching for the next 15 seasons.