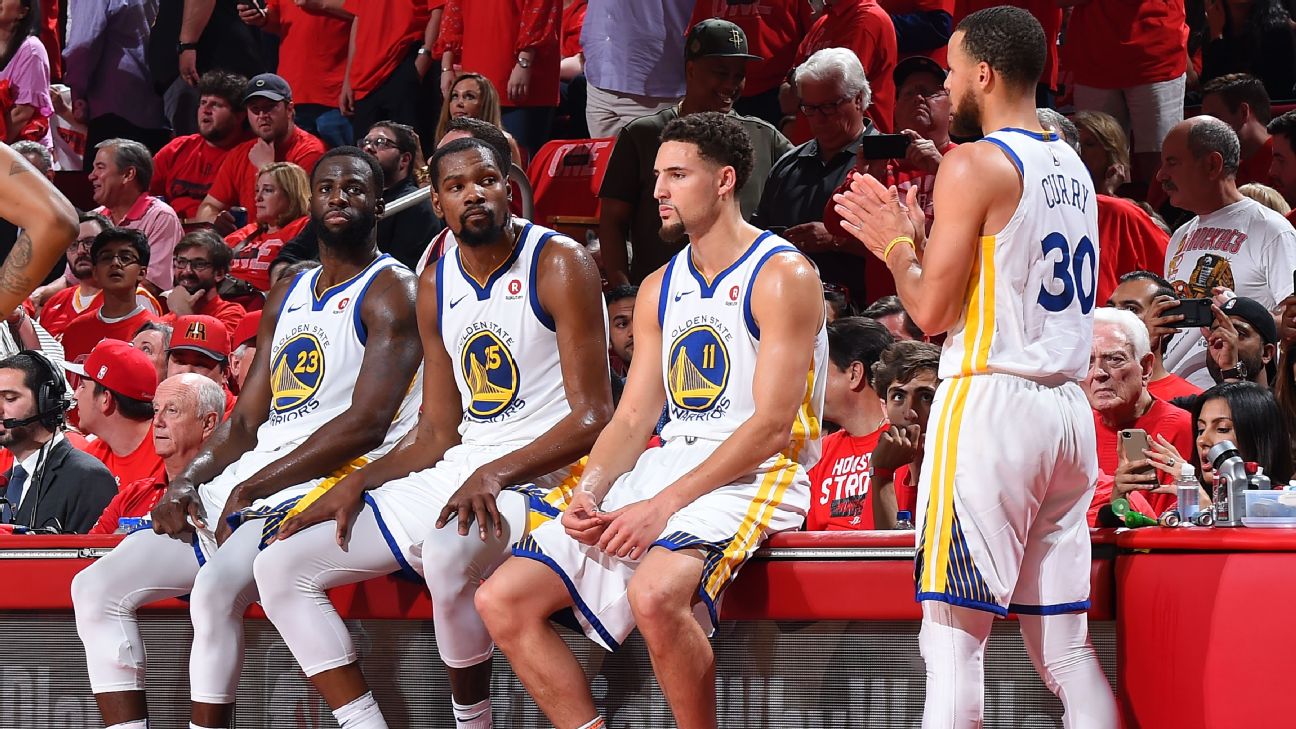 On the day after the Golden State Warriors lost the NBA Finals, hours after he walked with another limping star toward a gruesome MRI, Bob Myers woke up early to take his daughter to summer camp.

Myers, the team's president of basketball operations, was emotionally numb.

"As a human being, you can only process so much," he said of his emotions in that moment.

But life, like summer camp, goes on. And that's where the Warriors are as they embark on a summer with their dynasty on a knife's edge. In the days after their devastating Finals, where they lost Kevin Durant and Klay Thompson to terrible injuries, the Warriors have developed an audacious plan to try to hold their status as a championship team together, sources told ESPN.

Much of it centers on a huge volume of money. By the time free agency opens Sunday at 6 p.m. ET, the Warriors will have offered both Thompson and Durant full five-year maximum contracts. For Durant, that means $221 million, and for Thompson, $190 million. Even with the reality that Durant might miss all of next season recovering from a torn Achilles and Thompson might miss the bulk of it coming back from an ACL tear, this remains the Warriors' first choice.

For the Warriors to make max offers to both players and to retain free agent Kevon Looney, which is also a priority, their payroll this upcoming season could balloon to more than $375 million, including more than $200 million in luxury taxes, according to projections by ESPN's Bobby Marks.

This would create the most expensive team in league history, which the Warriors would be able to afford only because the brand-new Chase Center opening later this year in San Francisco is estimated to generate more than $200 million in new revenue, sources said. Within the past two years the Warriors have passed the New York Knicks and Los Angeles Lakers as the highest-earning team in the NBA, eclipsing the $400 million mark in annual revenue, according to sources.

Still hugely in demand despite his injury, Durant will get numerous other offers. If he wants to go elsewhere now, the Warriors are preparing plans to pivot and potentially try to work with Durant on a sign-and-trade deal. Myers has been staying in contact with Durant and his business partner Rich Kleiman since the season ended, according to sources.

Doing a sign and trade would enable Golden State to perhaps create a $37.6 million trade exception. This could prove remarkably valuable instantly, as the Warriors could then become players in the free-agent market. They couldn't use the exception to immediately sign a player, but they could explore sign-and-trade deals with free agents, opening a significant window for them to add to the roster.

The trade exception also could be used to acquire other players over the next year. To get a team signing Durant to do this type of deal, Golden State might have to incentivize the team with an asset like a future draft pick, a scenario the Warriors have been preparing for.

If a deal to sign and trade Durant can't be worked out, the Warriors have the option of trying to retain DeMarcus Cousins. Under the rules, the Warriors can offer Cousins a salary of only $6.8 million for next season. He could very likely earn more elsewhere, and the Warriors have long prepared to lose him.

However, if Cousins were willing to return, the Warriors could build some of their offense around him from the start of the season and feature him more, something that was impossible to do last season as he was recovering from an Achilles tear. That could be attractive to Cousins if he can't find a long-term deal and wants to continue to rebuild his value. The 2020 free-agent class is more shallow than this summer's, which might convince some players to take one-year deals.
As for Thompson, ESPN's Adrian Wojnarowski reported that the max offer to Thompson is expected to accelerate the process of the two sides reaching a deal.

Some outstanding issues that could force Thompson to look to create leverage involve the terms of the deal. When the Warriors lockedStephen Curryinto a five-year max deal in 2017, the team didn't allow Curry an opt-out clause in the last year of the deal and also didn't give him a no-trade clause, two valued items that superstars often negotiate. That set a precedent in how the Warriors look to deal with their other stars, and those deal points could become prickly in talks with Thompson, depending on his priorities.

Also this summer, the Warriors can negotiate an extension for Draymond Green, who has one season left on his contract. Green has expressed an interest in landing a new deal with the Warriors in the past, and he is open to a new deal this summer, sources said. Talks are expected to take place later in the offseason.

As the Warriors said often during their injury misfortune during the playoffs, no one is going to feel sorry for them. With their aggressive plans over the next few weeks, they aren't feeling sorry for themselves either.

He might not be a superstar like some of the others in this class, but Al Horford's entry into the free-agent market has sent numerous teams into a tizzy trying to get his valued services. Much like three years ago, when a number of teams rushed to offer him a max contract when he decided to leave the Atlanta Hawks, Horford is in such massive demand across the league that he's very likely to get the four-year, $100 million-plus deal he's seeking by opting out of his deal in Boston.

In addition to teams such as the Dallas Mavericks and New Orleans Pelicans, who instantly emerged as possible landing spots, league sources say there are a few surprise bidders who are trying to land the veteran big man. These include the Sacramento Kings and Philadelphia 76ers.

The Kings are interested in adding a center this offseason, and there's space for them to do it even with re-signing Harrison Barnes. It would require them to move on from Willie Cauley-Stein, who wants that anyway, as his agent has asked the Kings to let him go.

They'd potentially have the room to make an aggressive offer to Horford, but they have a number of the top centers on their list, sources said. In addition to Horford, the Kings could chase Brook Lopez and Nikola Vucevic. Lopez played for coach Luke Walton with the Lakers.

Philadelphia has its own free agents to deal with, namely Tobias Harris, Jimmy Butler and JJ Redick. Maybe the 76ers re-sign their guys and are never in the market. But if they don't re-sign all of them, they will have cap space, and they could chase Horford. Philadelphia has a wide range of options and is perhaps the most intriguing team to watch this summer.

One of the best spots for a player to be in is that of the gettable restricted free agent. Players who are in this gray area, where their teams might not match any offer, can sometimes drive fantastic deals, maybe even better than they could get if they were unrestricted free agents. Two players who've fit this bill in recent years are Zach LaVine and Otto Porter Jr., both of whom were believed to be gettable, and they landed tremendous offer sheets (which were matched).

This year, the player who seems to be squarely in that zone is restricted free-agent guard Malcolm Brogdon. With the Milwaukee Bucks facing a luxury-tax bill if they re-sign Khris Middleton, as they are expected to do, teams could challenge Milwaukee with a so-called toxic offer sheet for Brogdon. League executives believe a team could construct an offer sheet with the highest salary next season and then descending payments combined with a player option and possible bonuses that the Bucks might have to pay, but a new team might not.

The Chicago Bulls, Boston Celtics (if they don't land Kemba Walker), Phoenix Suns and Mavericks could consider an offer sheet for Brogdon and test the Bucks.

Meanwhile, the Bucks have not totally closed the door on George Hill, sources said. With just $1 million of his $19 million contract guaranteed, Hill will be waived by the Bucks. But the two sides have an interest in working something out to have Hill return. He could be an option if Brogdon gets an offer elsewhere that the Bucks don't match.

The center position is deep in this free-agent class, but one player to keep an eye on is DeAndre Jordan. As Jordan is one of the league's best defenders and a close friend of Durant's, teams who have interest in Durant have interest in bringing Jordan aboard as well, including the Brooklyn Nets and Knicks, where Jordan finished last season.

But Jordan, who played nine seasons with theLA Clippers, has an interest in playing in Los Angeles again, sources said. He would potentially be a fit for the Lakers, who are expected to try to find a way to sign Jordan and play him alongside Anthony Davis and LeBron James. 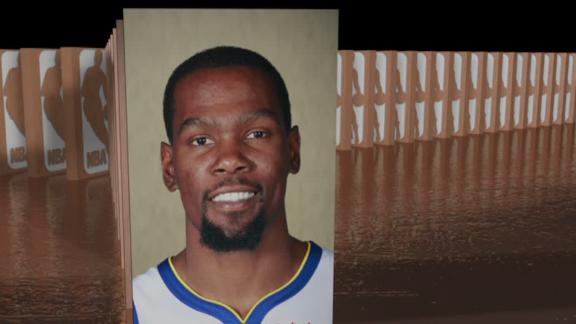 Durant's decision has major implications around the NBA
Brian Windhorst details that even with his injury, Kevin Durant's free agency could cause a domino effect for the list of teams pursuing him. 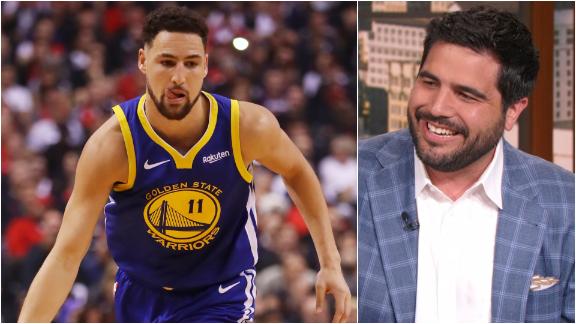