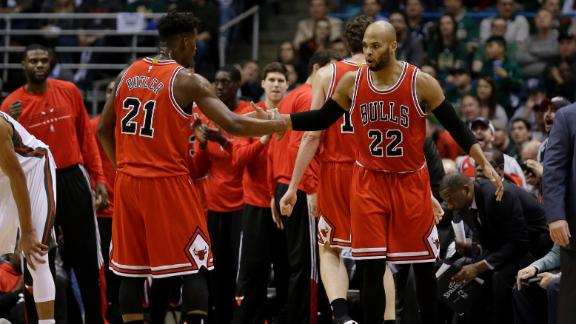 CHICAGO -- Bulls forward Mike Dunleavy will not be suspended for making contact with Bucks guard Michael Carter-Williams' jaw and neck during Game 6 of the Eastern Conference quarterfinals.

"I'm not surprised," Dunleavy said after Chicago's practice Saturday. "I wasn't expecting anything to happen so for that reason, no surprise on my end."

Dunleavy said he spoke to league personnel about the incident and agreed with the decision to upgrade his common foul to a flagrant 1 foul. No foul was originally called on the play, and Carter-Williams had to leave the game for a few minutes after the play was completed.

"Yeah, I guess so," Dunleavy said. "Because after seeing the replay, there was some contact above the neck, so in those situations that's what it mandates."

The Bucks took their frustration out on Dunleavy throughout the game. Giannis Antetokounmpo was ejected after picking up a flagrant 2 foul late in the second quarter after tackling Dunleavy after he hit a 3-point shot.

Antetokounmpo was suspended one game without pay Saturday, although Dunleavy said earlier that he hoped the Milwaukee swingman would avoid punishment.

"I don't think he should be penalized," Dunleavy said. "I thought he was penalized during the game. He got a foul, a flagrant foul, free throw and was ejected so it seemed fair to me. I don't think [there should be] anything worse than that.

"I got no issues with the guy. Nice kid, young kid, going to be a really good player. Doesn't change my feeling on wanting to get over to Mykonos."

Carter-Williams was called for a flagrant 1 foul in the third quarter after popping Dunleavy in the groin and near the face.

Dunleavy had his best game of the playoffs in Game 6, scoring 20 points in 28 minutes. Game 1 of the Eastern Conference semifinals between the Bulls and the Cavaliers is Monday night in Cleveland.