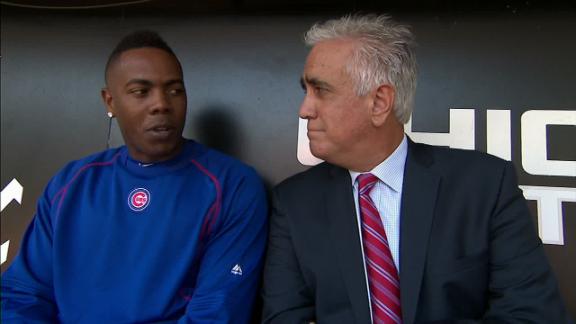 CHICAGO -- When theChicago Cubsacquired controversial, flame-throwing reliever Aroldis Chapman from the New York Yankees on Monday, there were sure to be repercussions beyond any baseball-related debate.

After issuing a written statement to the media through the Cubs upon being traded, Chapman was introduced to the local media Tuesday in a 20-minute news conference in the visiting dugout at U.S. Cellular Field.

Speaking to about 30 reporters and six television cameras through the Cubs' designated Spanish translator, coach Henry Blanco, Chapman seemed to skirt around several questions about the domestic-abuse incident that led to the 30-day suspension he served at the beginning of this season.

When asked what the Cubs asked him in regard to the off-the-field incident, Blanco translated for Chapman: "They told him what they expected for him, welcomed him to the club and he's going to be a part of the team. Hopefully, a guy that helps us to the World Series."

Variations of the response were repeated a few times to a media group that grew more impatient as the conference progressed.

At one point, when asked about the precise substance of a conference call between the pitcher, agent Barry Praver, Cubs president of baseball operations Theo Epstein and owner Tom Ricketts, Chapman paused for several seconds, and, after offering a brief response in Spanish, Blanco translated, "He was sleeping when they had a meeting with him on the phone, so he's trying to remember what he talked about."

However, after the group news conference ended, Chapman participated in a one-on-one interview with ESPN's Pedro Gomez that was conducted in Spanish. In that conversation, Chapman was more successful in offering answers to some of the same questions he had just been asked.

"I knew that no matter where I was traded to, this would resurface -- that the controversy is going to follow me," Chapman told Gomez. "But I'm with my girlfriend. Our family is together. We're working toward making things better in our lives. And really, it's going to be with me."

When asked what he has learned from the incident, Chapman told Gomez, "I've grown tremendously from that time. I'm with my girlfriend still, with the family, and I feel that I have absolutely changed as a person. I'm working to be a better person.

"And now that I remember -- because they just asked me in the previous press conference what the owners asked me -- one of the things they did ask me was about being a better person and being a better neighbor to people. And that's something that I think that I am now, much more so."

Those sentiments were echoed a bit later in an impromptu news conference with Epstein in the dugout.

"I think there is a lot to be said that he was nervous and not speaking his native language and being translated," Epstein said. "Look, I was on the call. Tom was on the call. Aroldis was on the call, and Barry Praver, his agent, was on the call. It happened, and it was real. We talked to him about the incident and made sure that statement reflected his real feelings on it.

"Because that was important to us, and to hear it directly from him. Tom laid out the exact same standards that he lays out to everyone in spring training."

"I think it shows that he may not have understood the question," Maddon sad. "You have to understand, this kid comes from Cuba, doesn't speak the language very well. It's easy to misunderstand."

Maddon added that Chapman was available to pitch Tuesday against theChicago White Soxand said that incumbent closer Hector Rondon was OK with the club's acquisition of Chapman, whose average fastball velocity of 100 mph is the highest in the majors, according to ESPN Stats & Information.

That, of course, is why the Cubs made the lightning-rod deal in the first place as the club tries to position itself for the franchise's first championship in 108 years. If that happens, it could well be Chapman on the mound finishing off the historic accomplishment.

"I don't feel any different pressure at all," Chapman said in his interview with Gomez. "I don't think that you have to put any pressure on yourself. I'm still the closer. I'm going to do the same job I always have."