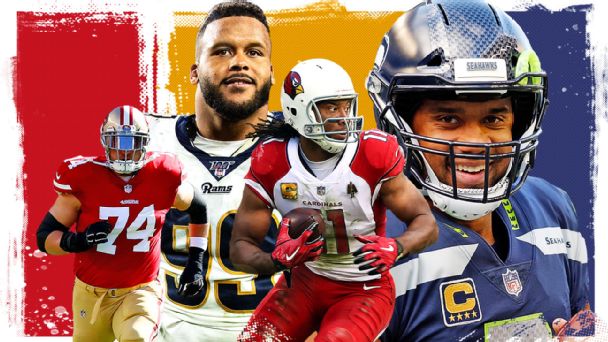 The start of a new decade is upon us with the 2020 NFL season. But before we get rolling with the '20s, ESPN is taking a look back at the best -- and worst -- of the 2010s and naming the top players of the decade for all 32 teams.

From the social media star of the decade to the worst call by a referee, ESPN's NFL team remembers the people and moments of impact -- good and bad -- from the past 10 years. And NFL Nation reporters select the two best players of the decade from their teams, the top coach and assemble all-division teams of the 2010s.


It all kicked off Monday with the best and worst of the NFL from the past decade.

NFC West players of the decade

This was as easy as it gets. Fitzgerald may be the best player in Arizona Cardinals history, so the player of the decade wasn't a reach. When the decade began, Fitzgerald was a 27-year-old in the midst of a five-year run of 1,000-yard seasons. By the time it ended, Fitzgerald was 36 and a surefire first-ballot Hall of Famer who had 100 catches and 1,000 yards two years ago. He was productive last decade despite a string of subpar quarterbacks. And when he had steady quarterbacks such as Carson Palmer or Kyler Murray, Fitzgerald shined. And as he got older, Fitzgerald still had a flair for the dramatic, making one-handed catches like he was in his 20s.

Honorable mention: Patrick Peterson, CB, 2011-present. Despite serving a six-game suspension last season for violating the NFL's performance-enhancing drug policy, Peterson is still one of the best cornerbacks of the 2010s. He went to eight straight Pro Bowls and was a three-time first-team All-Pro. His 25 interceptions last decade are in the top 10 for most during that span. Then there are the intangibles. Peterson's dominance in press-man coverage allowed him to play on an island, devoid of help from safeties, and kept quarterbacks from throwing his way. -- Josh Weinfuss

A two-time NFL Defensive Player of the Year, Donald entered the NFL in 2014 when the Rams drafted him with the 13th overall pick. He was named the NFL Defensive Rookie of the Year after he posted nine sacks and 18 tackles for a loss. In six seasons, Donald has 72.5 sacks, and in 2018 he set the NFL record for sacks by an interior lineman with 20.5, helping power the Rams to Super Bowl LIII. A six-time Pro Bowl selection and a five-time All Pro, Donald's production has earned recognition from players across the league who have not only vouched for his future in the Hall of Fame, but have proclaimed him as arguably the best defensive player in NFL history.

Honorable mention: Todd Gurley, RB, 2015-2019. The NFL Offensive Player of the Year in 2017, Gurley spent five seasons powering the Rams' offense. Since the Rams selected Gurley with the 10th overall pick in 2015, he has 1,483 touches, which is 125 more than any other NFL player in that time span. In 2018, Gurley scored a league-high 21 touchdowns as he played a significant role in spurring the Rams to Super Bowl LIII. Gurley is a three-time Pro Bowl selection and two-time All-Pro. -- Lindsey Thiry

The standard-bearer for 13 years at left tackle, Staley held down his spot for the entirety of the decade. Along the way, he earned six Pro Bowl berths, three second-team All-Pro nods and a spot on the NFL's all-decade team for the 2010s as San Francisco went to four NFC Championship Games and won two of them. One of the most athletic tackles to ever play, Staley was known as much for his fun-loving personality as his production on the field, all of which makes him one of the most beloved Niners in franchise history.

Honorable mention: Patrick Willis, LB, 2007-2014. He retired after the 2014 season at 30 because of a nagging toe injury. But it speaks to his consistent excellence that he played only half the decade and still made the NFL's all-decade team for the 2010s. Among his other honors in that span: four Pro Bowl appearances and three first-team All-Pro nods. -- Nick Wagoner

Wilson is the easy choice even though the Seahawks have had plenty of stars during their most successful stretch in franchise history. Since his rookie season in 2012, Wilson owns the NFL's sixth-highest passer rating (101.2), the fifth-most touchdown passes (227) and the most comebacks in the fourth quarter or overtime (32) of regular-season or postseason games. He has missed the Pro Bowl only once in that span and, in a sometimes overlooked accomplishment, hasn't missed a game. While Wilson was no doubt aided by an elite defense early in his career, including when Seattle won Super Bowl XLVIII and reached the Super Bowl the following year, he's had to carry much more of the load in recent seasons while covering up deficiencies elsewhere.

Honorable mention: Bobby Wagner, LB, 2012-present. If your knee-jerk pick was Richard Sherman, Earl Thomas or Marshawn Lynch, consider: Wagner's six Pro Bowls as a Seahawk are tied with Thomas for the most among the four, and his five first-team All-Pro selections with Seattle are two more than any of the others. Sherman's tip in the NFC title game and Lynch's Beast Quake run are signature plays, but Wagner's overall body of work gives him the nod as runner-up to Wilson. -- Brady Henderson

NFC West coach of the decade

This one's a no-brainer, as none of Carroll's counterparts were around nearly long enough to challenge him for the honor. The 49ers are on their fifth full-time head coach since the Seahawks hired Carroll in 2010 while the Cardinals are on their fourth and the Rams are on their third. The Seahawks' 100 regular-season wins since then are tied for fourth most in the NFL and are 20 more than the NFC West's next-best team, San Francisco. Carroll's Seahawks have the division's lone Super Bowl victory of the 2010s, a 43-8 trouncing of the Denver Broncos in which his defense put on a performance for the ages. -- Brady Henderson

Honorable mention: Jim Harbaugh, 49ers, 2011-2014. Harbaugh's star burned bright before fading away almost as fast as it rose. The Niners hired him in 2011 and upon arrival he took them to three consecutive NFC Championship Game appearances, including a win after the 2012 season. In four years in San Francisco, Harbaugh went 44-19-1 but his hard-charging style resulted in his departure after an 8-8 season in 2014. -- Nick Wagoner 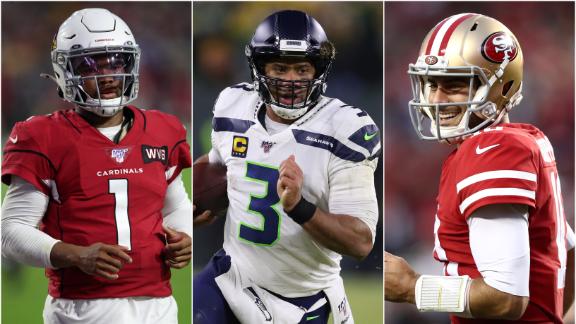