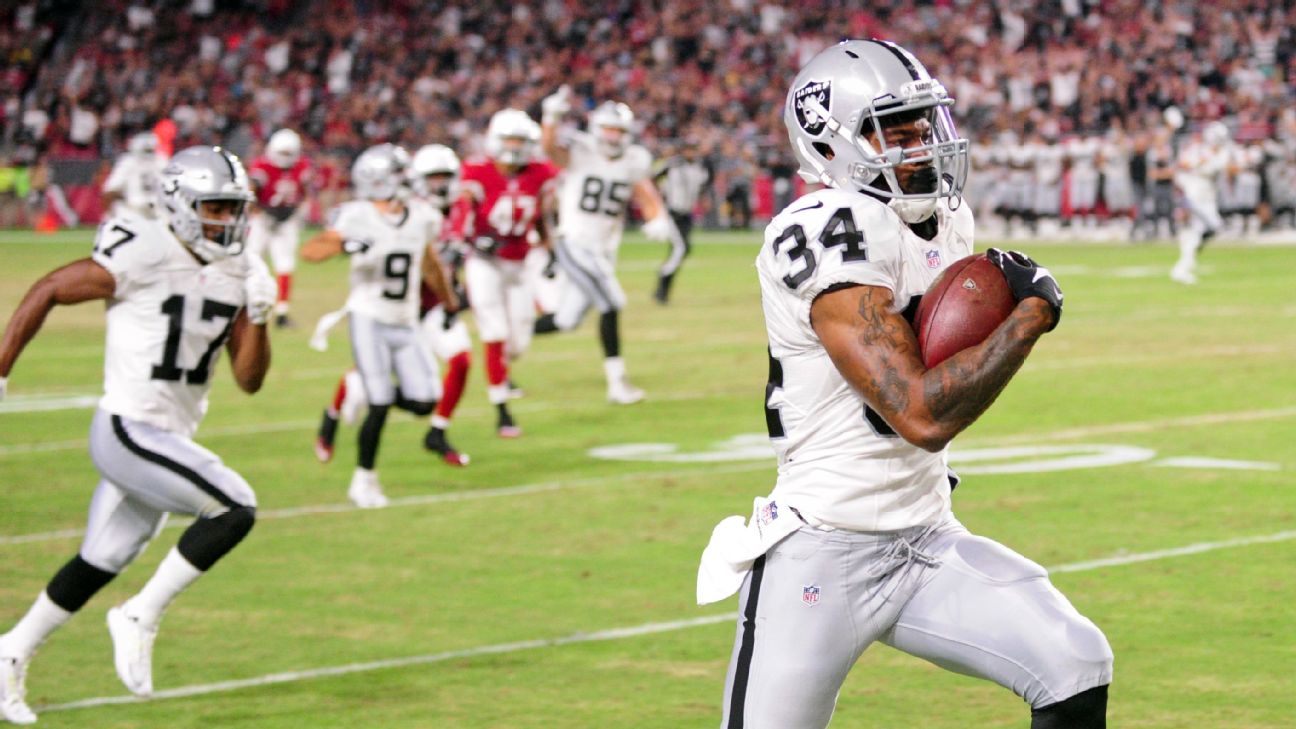 "It's crazy how quick life can come at you, and I love George," Carr said Wednesday. "We had a lot of fun playing basketball at 24 Hour Fitness, as well as playing football games together and competing together. He was always so joyful, man. So happy every single time. It felt like he was cut and re-signed a whole bunch of times, and every single time, he just looked so thankful to be here. So I just wanted to say that we're thinking about him and his family that we love."

Atkinson was the son of former Raiders strong safety George Atkinson, a two-time Pro Bowler who played for Oakland from 1968 to 1977 and had 30 interceptions, and he appeared in five games with the Raiders in 2014, returning seven kickoffs for 134 yards.

An undrafted running back from Notre Dame, the younger Atkinson also played for the Cleveland Browns in 2016.

His twin brother, Josh, who also played for the Fighting Irish, died last December, and Atkinson recently wrote an open letter in TheUnsealed.com describing his rough upbringing with their mother, who he said had paranoid schizophrenia and drug addiction and died in October 2018. He also wrote that his brother killed himself, about his own struggle with mental health and how he had tried to harm himself before, and about his father entering their lives when he and his brother were 13 and instilling discipline.

"Like you, I am still struggling," Atkinson wrote. "My mother's birthday just passed and I know the holidays this year won't be easy. But I am trying to take life one day at a time."

"I heard about what he wrote, obviously, but I would have never guessed that he was struggling that hard," Carr said of Atkinson. "I know things had happened in the year prior and things like that make you hurt, but every time I was around George, I never thought that he was hurting that much, to be honest. Every time I was around him, he was full of happiness, full of joy, always joking."
Report a correction or typo
Related topics:
sportsespnnewsnfloakland raidersderek carr
Copyright © 2021 ESPN Internet Ventures. All rights reserved.
TOP STORIES
2 dead, 4 hurt in downtown San Rafael shooting
Doctors gear up for Delta variant's potential peak this fall
Imprisoned 'Dating Game Killer' Rodney Alcala, 77, dies in California
EDD sending 'conditional payments,' but critics still skeptical
Bay Area's 4th COVID surge on track to 'worsen' in 3 weeks
SoCal man, 34, who mocked vaccines dies of COVID-19
Authorities 'perplexed' by disappearance of Berkeley runner
Show More
EXCLUSIVE: SF restaurant hit by explosion; unsure of future in city
US purchase extra Pfizer doses for children, possible booster shots
New legislation would require women to sign up for potential draft
Gilroy Garlic Festival returns with sold out sales for day 1
Curry, Howard Golf continue to grow through Pebble Beach event
More TOP STORIES News