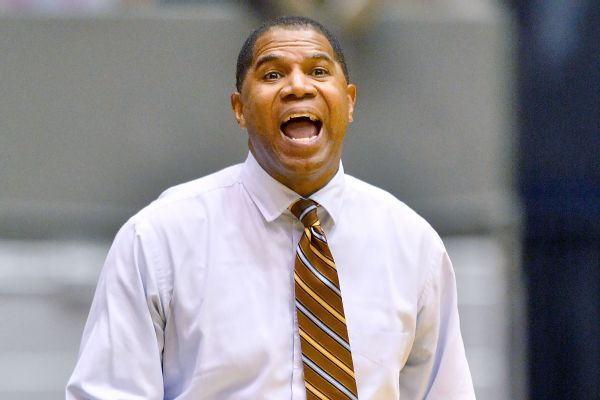 Morehead Statebasketball coach Sean Woods allegedly head-butted one of his players last year, the father of the athlete told ESPN on Wednesday.

Edson Maitland is now asking Morehead State to terminate Woods, who is suspended indefinitely with pay after he was charged Tuesday with misdemeanor battery for allegedly assaulting Malik Maitland and Soufiyane Diakite last month.

"We are very, extremely disappointed in coach Woods," Edson Maitland told ESPN, as he read from a prepared statement on behalf of his family. "He came into our home and violated our trust, the trust that we put in him as a coach. Not only did we ask him to coach our son, but to treat our son just as he would treat his own son. He was reckless with willful intention in his action toward my son, inflicting such a pain on him.

"This is not the first time he violated our trust because last year, during the season, he head-butted my son and turned around and asked him to forgive him, and he apologized, and my son accepted his apology, and [he] said he would never do it again. And as for the school, I'm still waiting for a response from them and to take corrective action and appropriate action without any form of a delay, saying they're still investigating. And as for all the assistants that are there working, I'm appalled, because they are an extension of Coach Woods, and I think the NCAA should step in and take appropriate action."

Woods was charged with misdemeanor battery, according to court documents obtained by WTVQ, after he allegedly backhanded Malik Maitland in his chest at halftime of a Nov. 19 matchup at Evansville and shoved Diakite during and after the game. Edson Maitland said his son told him about the alleged assault after the matchup.

Woods, who played with "The Unforgettables" Kentucky squad that reached the Elite Eight in 1992, was suspended three days after the game at Evansville.

Evansville Sgt. Patrick McDonald said misdemeanor battery in Indiana is defined as any alleged assault that results in a "complaint of pain" from an alleged victim. It does not mean anyone was injured, he said.

In 2012, in his first season with Morehead's program, Woods was suspended for shoving former player Devon Atkinson during a game.

Edson Maitland said he wants Woods terminated and legally punished for his actions.

"I not only want him gone, I want him prosecuted to the full length of the law," he said.

When asked for a response to Tuesday's charges, Morehead State spokesman Nick Evans referred to the statement the school distributed after it suspended Woods last month.

"Resulting from complaints received, the institution has begun an investigation involving the head basketball coach," athletic director Brian Hutchinson said in the statement. "While we continue through the formal process, we believe it is prudent to suspend the coach until the investigation is finished."