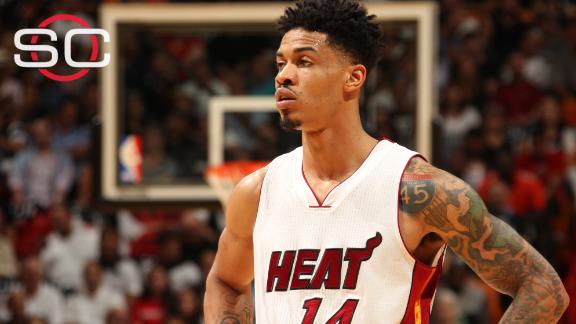 ESPN
MIAMI -- A police report released Wednesday says that Miami Heat guard Gerald Greenpunched a man, was combative with paramedics and eventually needed to be handcuffed just so rescue personnel could transport him to a trauma center last week.

The Miami police incident report said the man who was punched by Green did not wish to press charges.

The report sheds some light on the circumstances surrounding Green's mysterious absence from the Heat and subsequent two-game suspension for conduct detrimental to the team. Green will serve the final game of that suspension Thursday, when Miami hostsUtah, and is expected back on the practice floor on Saturday.

According to the report, Green asked the front-desk staff at the building where he was staying to call Miami Fire Rescue around 10:20 a.m. on Nov. 4. Green had blood on his hands, for reasons not made clear in the report.

Green, the report continues, then walked out of the building and collapsed on the valet parking ramp. After getting up, he returned to the lobby with the help of a man who was trying to keep him in the area while paramedics responded.

That's when Green, according to the report, punched the man in the right eye. Fire rescue personnel were able to restrain Green, then asked police to handcuff him for transport because he was "very loud and verbally combative," the report said.

Green's absence from the team started Nov. 3, when he missed a game because of illness. He has not been with the club since, but he is expected to be eligible to play Nov. 17 when Miami hostsMinnesota.

Green is averaging 10.3 points in three games with the Heat this season.