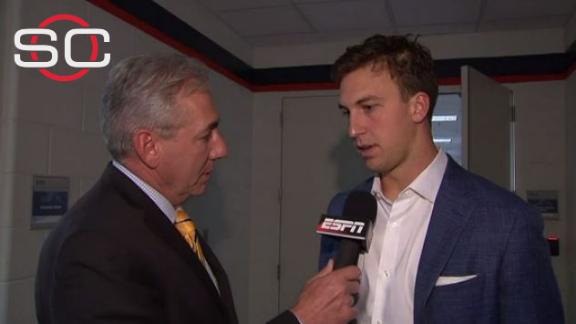 ESPN
By Jeff Legwold
DENVER -- In the end,Trevor Siemian didn't throw for 180 yards in his first NFL start, he did throw two interceptions, and it wasn't always a smooth ride on the learning curve.

But the24-year-old never lost his composure and showed why Broncos coach Gary Kubiak picked him asPeyton Manning's replacement in a tense 21-20 victory over the Carolina Pantherson Thursday night.

"Sure, there's butterflies every time you play," Siemian said. "I think something is wrong with you if you don't. I'm just super confident in the group of guys we have offensively. There are a lot of vets and a lot of great leadership in that group that I can lean on, and I'm just really confident in those guys."

Siemian, whose NFL résumé coming into the game had been just one regular-season play, a kneel-down against the Pittsburgh Steelers in December, finished 18-of-26 passing for 178 yards with a touchdown and the two interceptions.

But Siemian was composed in big moments, putting together two touchdown drives in the second half as the Broncos became the first Super Bowl winner to trail by at least eight points in the next season's opener before coming back for the win.

The Broncos rushed for 148 yards in the game and had a close-to-even split in the play-calling with Siemian's 26 pass attempts to go with their 29 rushing attempts.

"I thought Trevor handled his end of the bargain well," Kubiak said.

The Broncos opened the game with an apparent case of nerves around their new quarterback. They had taken their opening drive to the Panthers' 29-yard line when rookie Devontae Booker fumbled. Siemian's first interception ended the Broncos' second drive at the Panthers' 25-yard line.

On that play, Siemian's throw was swatted by Panthers defensive tackle Star Lotulelei before being intercepted by linebacker Thomas Davis.

The Panthers had a 17-7 lead at halftime, and Siemian was picked off again in the Broncos' first possession in the third quarter when, in the face of a blitz, he couldn't step into the throw.

Wide receiver Emmanuel Sanders was open inside the Panthers' 10-yard line, but the pass was underthrown and intercepted by Panthers cornerback Bene Benwikere.

Kubiak said Siemian was never rattled after all of that.

"Nah, he wasn't," Kubiak said. "And actually the second interception, it really wasn't his fault ... and in fairness to the kid we should have picked [the blitz] up and he should have been able to step and throw. We didn't get that done."

Siemian then showed what likely won him the job in the first place, at least in addition to a power arm. It's his composure and ability to rebound from trouble.

After his second interception and a rather ugly three-and-out, Siemian led two touchdown drives. The first of those scores came when Siemian stared down the Panthers pressure and tossed a screen pass to running back C.J. Anderson, whotook it 25 yards for a score that made it 17-14.

Said Kubiak: "That was a great job. ... But Trevor really did an amazing job of pulling the rush in and getting the ball off ... just really good by kind of handling the situation."

Anderson scored on a 1-yard run to close out the Broncos' next possession and put Denver in position for the comeback win.

"We've got a resilient team, and you saw that tonight," Siemian said.

Siemian shakes off early picks to lead Broncos comeback
Trevor Siemian talks about bouncing back from early interceptions to lead the Broncos to a win over the Panthers and thanks the team's coaching for having him prepared for the game.
Related topics:
sportsespnsuper bowl rematchnfltrevor siemiandenver broncosquarterback
Copyright © 2020 ESPN Internet Ventures. All rights reserved.
More Videos
From CNN Newsource affiliates
TOP STORIES
Santa Clara County says homeless with COVID-19 have temporary shelter