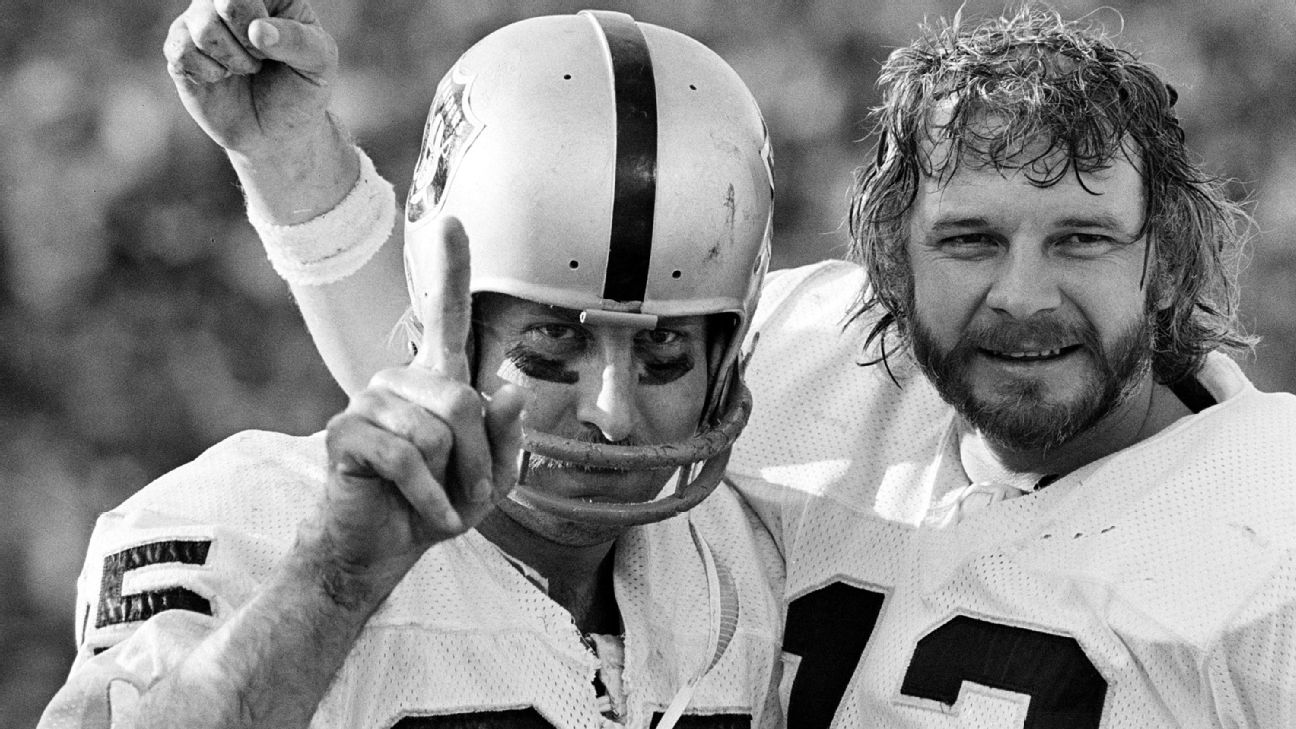 NAPA, Calif. -- Talk about a sticky situation, or a serious case of déj vu.

For Fred Biletnikoff, it was the 1970s all over again when the Oakland Raiders Hall of Fame receiver broke out an old friend for a newer friend, then lathered gobs of Stickum on Peyton Manning's hands and forearms to show the former quarterback what it was like to play with the stuff for Manning's ESPN+ series Peyton's Placesto commemorate the NFL's 100th anniversary.

"I don't know what he expected," Biletnikoff said later, laughing. "He was very interested in it. After we put it on him, he started making one-handed catches and really put on a great performance."

Biletnikoff was howling now, recalling how, after he fired the football at Manning with the JUGS machine, Manning simply snagged the ball midflight with one hand. Then he did it again. And again.

No wonder then-Raiders equipment manager Dick Romanski had to manually feed Biletnikoff his chewing gum on the sidelines, before, during and after games.

Romanski would have his staff unwrap the gum, place the sticks in two separate plastic containers -- two Juicy Fruits and one Wrigley in one container; two Spearmint and one Doublemint in another -- and he would place one container in each pocket on game day in preparation for the receiver.

It was a formula for Biletnikoff, who chewed gum rather than use a mouthpiece and, yes, Biletnikoff fed Manning a stick of gum too. Just for old times' sake.

Stickum was everywhere in Biletnikoff's heyday. In cold-weather games, he would put it on the inside of his thighs to keep the goop warm so it would not freeze on him and lose its consistency.

"But not too close to the crotch," Biletnikoff said with another laugh. "You don't want that stuff too close to your privates."

And while Romanski was just fine unwrapping and then feeding gum to Biletnikoff, the mess Stickum created was an issue for Romanski's day job.

"Dick used to yell at me, 'I gotta clean these goddamn uniforms!"' Biletnikoff recalled. "So I just said, 'Talk to Al [Davis].' He just always told us, 'Do whatever you got to do to win.' So ..."

"It was all over the place," Bob Romanski recalled. "Helmets were the worst.

"Mondays were, the whole day, with turpentine trying to clean it off the helmets and off the shoulder pads. Yeah, it was everywhere. They'd sit after the game -- there was a washer and a dryer in the back of the old Raider locker room in the [Oakland] Coliseum -- they'd sit there with that paint thinner and towels and just sit there for hours, just rubbing it, trying to get it all off. I don't know how they did it."

Back when the AFL and NFL both held drafts in late November, Biletnikoff was taken by the Raiders in the second round of the 1964 AFL draft and also was selected by theDetroit Lionsin the third round of the NFL draft.Biletnikoff signed with Davis under a goalpost in the Gator Bowl immediately following his Florida State team's win over Oklahoma on Jan. 2, 1965.

Biletnikoff had four receptions for 79 yards, including two big catches that set Oakland up at the 1- and 2-yard line, respectively, in the Raiders' Super Bowl XI victory over theMinnesota Vikingsfollowing the 1976 season. Named the game's MVP, Biletnikoff was given a hug in the locker room by then-receivers coach Tom Flores.

"They had to almost pry us loose with a crowbar he had so much Stickum on," Flores joked in 2014.

As much as Stickum helped Biletnikoff hold on to the ball in battles with stingy defensive backs -- yes, he also caught one TD pass against the Houston Oilers on his outstretched right forearm, the ball hitting and sticking -- he said he forgot to tell Manning how it tweaked teammates.

"There were times when I was playing with Kenny [Stabler] and Daryle [Lamonica] and the Stickum would get on the ball and they would bitch and moan about it because they would not be able to get it off the ball," Biletnikoff said. "So they'd have to find another ball. Same thing."

Stickum was outlawed in 1981, three years after Biletnikoff played his final game -- and a year after Raiders cornerback Lester Hayes took Stickum to another level, as in all over his body, and intercepted 13 passes.

"Yeah, OK, that's good," the younger Romanski recalled his father's staff saying after the goop was banned. "We can do without that.

"You got to think road games too, because a road game you try to get out as quick as you can. There's not a lot of time."

Bob Romanski recently came across a pristine, unopened can of Stickum in his late father's belongings, and the smell brought back a sense of nostalgia.

In fact, Biletnikoff said he would have rather used the gloves favored by today's receivers.

"That," Biletnikoff said, "would have been easier."

And much cleaner for a player seen as having some of the surest hands in the history of the game.

"He did not need it; it was a psychological thing with Freddie," the late Stabler told NFL Films of Biletnikoff's Stickum captivation.

"He just thought he had to have it. But whatever makes you comfortable to play, and that was Freddie ... after he catches his first pass, then you've got to go right to the official and get a new ball. He was that way the whole game -- just a mess."

As was Manning after his history lesson with Biletnikoff.

"Taking it off after the game," Biletnikoff said. "Listen, I'm a smoker. Paint thinner was the only thing that would get the Stickum off me. I couldn't smoke around it or I might catch on fire. And the fumes would make me sick, and then you'd get a rash where the stuff was for a week. Ugly.

"Yeah, I didn't tell Peyton about all that." 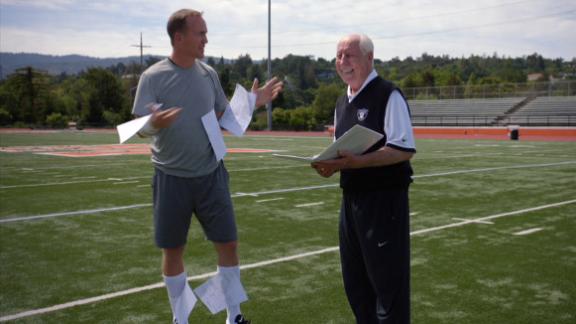