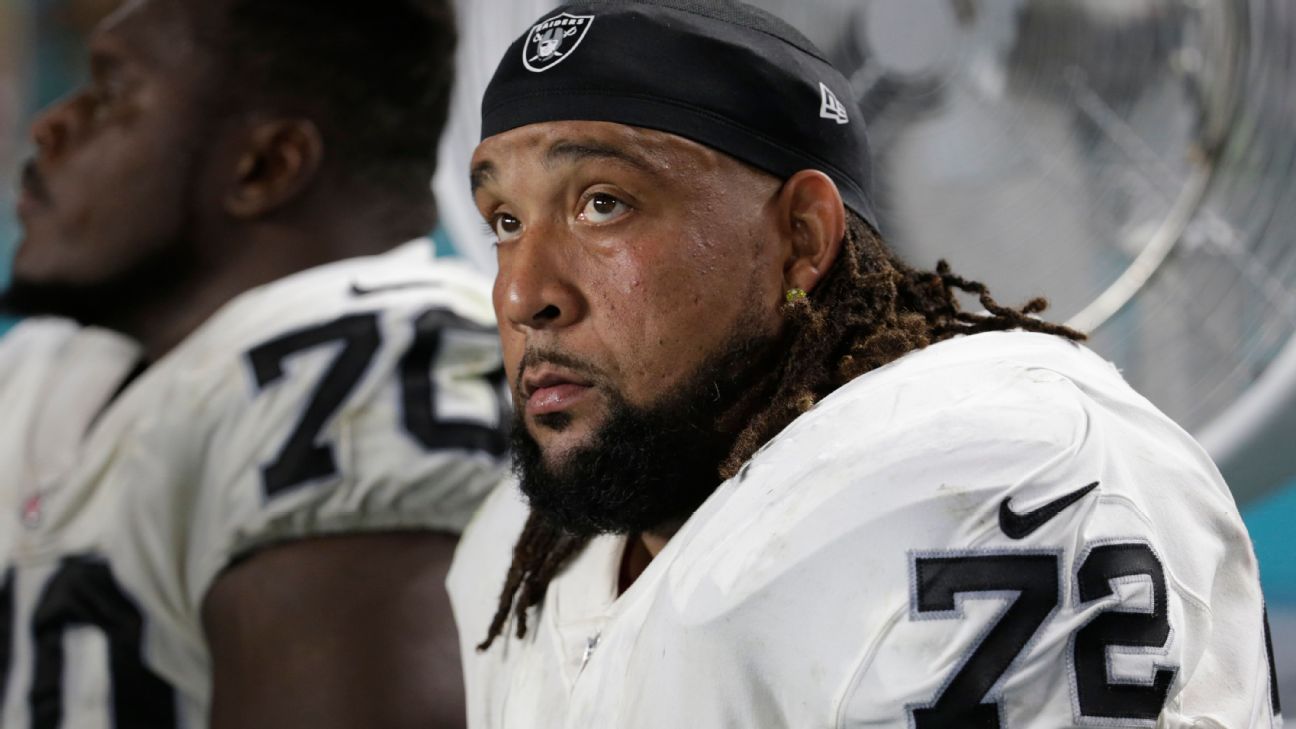 The Oakland Raiders released offensive tackleDonald Penn on Saturday, cutting ties with the longest-tenured player on their roster.

The Raiders said they came to a mutual decision to release Penn, who became expendable this week after Oakland signed Trent Brown to a four-year, $66 million contract that is the richest ever for an offensive lineman.

The Raiders drafted Kolton Miller in the first round and Brandon Parker in the third round last year, leaving little room for the 35-year-old Penn and his hefty salary.

"It is always hard to say goodbye to players that you respect and love both for their on-field efforts and the people that they are off the field," Raiders owner Mark Davis said in a statement. "Donald Pennis another one of those great Raiders who have come into the organization and left an indelible mark on the franchise and the Raider Nation as a whole. He came to Oakland already with a deep passion for Raiders football and served as a leader and example for the team for five memorable seasons. Donald will always be a Raider and his presence will be missed by the entire Raiders Family. I wish the absolute best for Donald and his family."

Penn posted a lengthy goodbye to Raider Nation on his social media pages, indicating he would not retire.

"It was a difficult decision, but one that I feel is best for my career because I still feel like I have years left in me as a starter in the NFL," he wrote.

Penn originally signed with Oakland as a free agent in March 2014 and was part of a roller-coaster ride during his five seasons with the team. The Raiders lost their first 10 games in Penn's first season before turning into a playoff team with 12 wins in 2016.

Penn missed the playoff game with a knee injury and then saw the Raiders slip to 6-10 in 2017, when his season ended with a foot injury in Week 15. Penn played just four games last season before a groin injury put him on IR as Oakland finished 4-12 in coach Jon Gruden's first season back.

Penn made two Pro Bowls during his tenure in Oakland and was a leader in the community and in off-field projects.

His departure leaves quarterback Derek Carr, guard Gabe Jackson, defensive tackle Justin Ellis and receiver Seth Roberts as the only players on the roster who were part of the organization in 2014.

Penn entered the league with Minnesota as an undrafted free agent in 2006 and made his NFL debut with Tampa Bay the following season with Gruden as his head coach. He started 170 consecutive regular-season games until his foot injury in 2017, with the only contest he missed coming in the playoffs following the 2016 season.

"We're going to miss Donald Penn around here,'' Gruden said. "I got to coach him as a young guy in Tampa, and everything he got on the field, he earned. I was lucky enough to get him again here in Oakland. I'm going to miss the toughness and passion that he brought to the team every day. I certainly wish him and his family all the best."