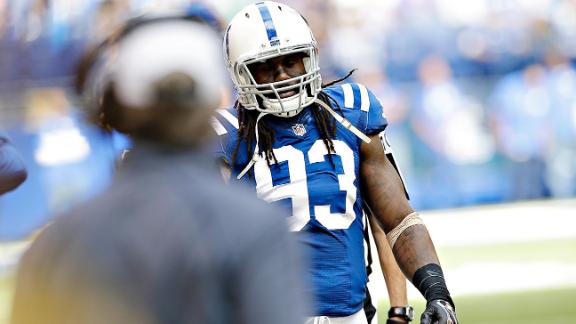 Indianapolis Colts linebacker Erik Walden was slashed in the arm with a knife and his female companion suffered a broken arm after allegedly being attacked by the player's ex-girlfriend in Braselton, Georgia, late Saturday night, according to a report.

WXIA-TV in Atlanta reported that Walden called 911 after he had to wrestle his gun away from Erica Palmer, who was also armed with a baseball bat, with which she struck his companion in the arm and then ran away.

The Braselton Police report said Palmer reappeared as Walden was attempting to take the injured woman to the hospital and then allegedly slashed Walden's arm with a knife and ran again.

A source told ESPN.com that Walden, who was treated at a hospital and released, is OK and that the slash was not severe enough to cause any major damage going forward.

Walden has 82 tackles and nine sacks over the last two seasons with the Colts. He also has played with the Green Bay Packers, Miami Dolphins and Kansas City Chiefs over his seven-year NFL career.