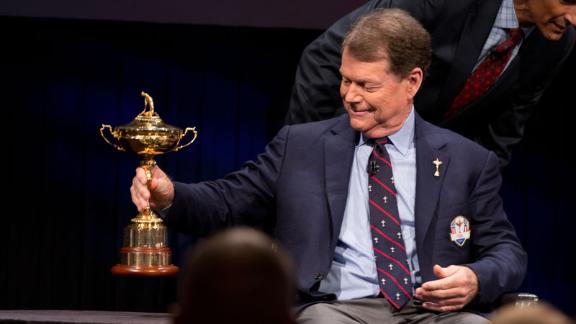 McIlroy has been part of two winning European teams and is considered a big reason his side is favored to win again in three weeks at Gleneagles in Scotland.

"If we can really just manage our expectations, because we're going to be big favorites going in, and everyone's going to assume that we are going to take another Ryder Cup," McIlroy said Wednesday at Cherry Hills Country Club, where he played in the pro-am preceding this week's BMW Championship.

"But it doesn't quite work like that. ... It's been tighter than people think. And I think it will be the exact same way this year. So we just have to manage our expectations and go out there and make sure we put a lot of points and a lot of blue on the board early and go from there. Get the crowd behind us."

Each of the past two Ryder Cups has been decided by the smallest margin possible: 14½-13½. Had any of the 28 matches gone from a win to a tie or a tie to a loss, the outcome would have switched.

And McIlroy clearly has taken note of what occurred. In the past two Ryder Cups, the Americans actually claimed seven of the nine sessions but still lost the overall match.

"That Sunday in Wales was combined into two [due to weather problems] and we won that one 5½-½," McIlroy said. "And then the singles in 2012 [when Europe came back from 10-6 down to win]. Those are the only two sessions that we have won. There's obviously been some tied sessions and some that went the U.S.' way."

McIlroy, who is from Northern Ireland, won two majors this year, and teammate Martin Kaymer -- who clinched the winning point in 2012 -- captured the U.S. Open and Players Championship. Justin Rose has won twice this year, and players such as Sergio Garcia, Stephen Gallacher and Graeme McDowell have all won.

The U.S. team has had just three winners since the beginning of April: Bubba Watson at the Masters, Matt Kuchar at the RBC Heritage and Hunter Mahan two weeks ago at the Barclays. And yet, the Americans' average world ranking among the 12 players is slightly better than that of the European team.

Webb Simpson is the lowest-ranked American at No. 32 in the world, while Gallacher (34), Ian Poulter (36) and Lee Westwood (38) are the lowest Europeans.

Gallacher, Poulter and Westwood were captain Paul McGinley's at-large picks, with Gallacher a Ryder Cup rookie but Poulter (12-3) and Westwood (18-13-6) two of the event's most accomplished players. Another one, Luke Donald (10-4-1), was left off the team.

"It was a flip of the coin between Luke and Lee," McIlroy said. "Each had attributes that the other didn't. Paul, at the end of the day, went for the experience and probably more of a talisman in the team room.

"What you would get with Luke is he's a great short-game player, he's going to hole putts for you when he needs to. Both would have been as good as each other. It's disappointing for Luke that he didn't quite make the team, but saying that, it's a very strong 12 that we have and we have a great chance to win again."