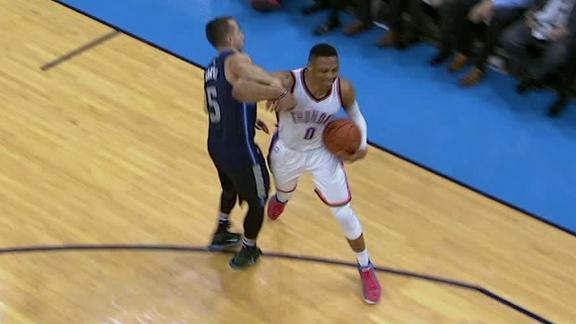 ESPN
By Royce Young
OKLAHOMA CITY --ThunderguardRussell Westbrook was ejected in the second quarter of Wednesday night's 108-89 win against the Dallas Mavericks after picking up a second technical foul with 1:20 remaining in the half.

Both technical fouls were the result of tussles with Mavericks guard J.J. Barea.

The first technical came after Barea was called for a foul on Westbrook with 5:17 remaining in the second quarter. The two players got tangled up and then pushed each other, with Barea swinging his arm at Westbrook.

"Just a regular play, a post-up, got physical," Barea said. "Nothing extra, though. Just a regular foul, then he threw his arms and went a little crazy after that. I was there. I wasn't backing down. He started pushing, I started grabbing. He grabbed me and flailed his arms."

The skirmish led to pushing, shoving and jawing among all 10 players on the court. No bench players came onto the court, but many coaches and security officials from both teams helped the game officials break up the scrum.

After a seven-minute officials' review, Barea, Westbrook and Serge Ibaka each received a technical foul andCharlie Villanuevadrew two technicals and was also ejected.

Villanueva had grabbed Westbrook's throat and pushed him back and then engaged in more pushing with Ibaka.

"I will always stand up for a teammate," Villanueva said. "That's just my makeup. I should have controlled it a little bit more, of course, but my emotions got the best of me. It's over with now."

Without Villanueva, the Mavericks were reduced to nine active players; they were resting their entire starting five following an overtime loss to the Cleveland Cavaliers on Tuesday.

Barea later reached in and grabbed Westbrook during a Thunder transition opportunity to take a foul. Westbrook reacted, swinging his arm out and yelling, "Get the f--- off me, man!" Westbrook was hit with the second technical, leading to an automatic ejection.

"Same thing again. Same thing," Barea said of the second incident. "I fouled him, and then he went crazy again and threw his arms all over the place. The ref was right in front of him, so he saw it that time."

This is the third ejection of Westbrook's career. His previous one came on Dec. 31, 2014, against the Phoenix Suns.

Westbrook declined to talk after the game about the incident, instead answering every question about it with a comment about how the Thunder played.

"Oh, man, I thought we did a great job tonight," Westbrook said when asked what sparked the altercation. "Good win for us. This Dallas team came in without a lot of their guys, and we did a good job competing."

Asked if he thought the Mavs intended to make the game chippy because they were short-handed, Westbrook said, "I just thought we did a great job of playing together. Guys did a great job --Dion [Waiters],Kevin [Durant], guys came off the bench and made some big plays. Playedwell."

Finally, asked about whether Barea, a player he has scuffled with in the past, was focused on being an irritant, Westbrook said, "I just think together, overall, played a good game. A good energy, defensively did well, forced some turnovers, got out in transition."

Westbrook paused, and a reporter began to ask another question.

"I wasn't done," he said. "Got out in transition, made some 3s. I think we tied our season high tonight, so it was good for us."

Asked to weigh in on the altercations that ultimately led to Westbrook's ejection, Durant said, "That's how Barea is.He's a chippy player. I mean, he has to be that way. He's the smallest guy in the league, one of the toughest guys in the league, as well. So we knew he was going to try and add a little something to the game, but we did a good job keeping our heads. I know it got a little testy there, but that's part of basketball. That's a part of competitiveness. But we didn't let it get us down. We kept playing through it."

"I didn't agree, either," Durant said. "But after the first skirmish, I guess, they just tried to -- you could tell all night, they were calling it a little tight. Barea was arguing with the ref, Coach [Rick] Carlisle was arguing with the ref to give [Westbrook] a tech. He knew it was going to come after what happened early on. If that whole thing didn't happen before, that wouldn't have even been a tech. I guess they had to kind of control the game, but it was unfortunate, and I'll end it there."

Barea finished with a team-high 18 points in 31 minutes and was booed every time he touched the ball following the incidents.

"I ain't got a problem with it," Barea said. "I've been booed in college a lot, but I don't have a problem in it. I know deep down that they like me here in Oklahoma. Deep down, they like me, but if they want to boo me, I'm fine with it."

Westbrook finished the game with zero points on 0-of-3 shooting, seven rebounds and eight assists in 14 minutes. It's the second scoreless game of his career, the first coming in 2010 against the Indiana Pacers.

Just two weeks ago, Westbrook had vowed that he was "done" picking up technicals, saying he had learned his lesson after drawing an NBA-high 17 last season. He was specifically referring to arguing with referees, though.

ESPN's Tim MacMahon and The Associated Press contributed to this report.