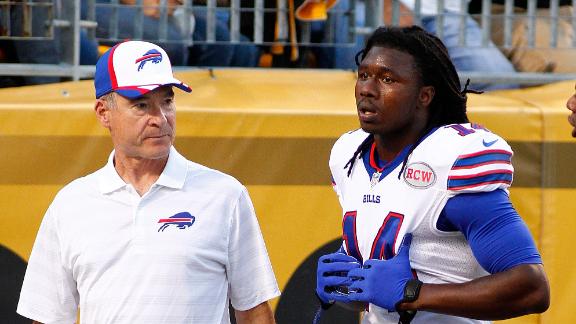 Watkins had X-rays of the ribs taken, the results of which were unknown immediately after the game, coach Doug Marrone said.

"They're going to run tests and everything and we'll see how he is," Marrone said.

Watkins took a hit from Steelers linebacker Ryan Shazier on a third-down pass from EJ Manuel, which fell incomplete but was negated by a separate Steelers penalty. The rookie receiver immediately grabbed for his side, under his left arm.

Trainers and team doctors examined Watkins on the sideline before he walked to the locker room under his own power.

"I think Sammy will be fine," Manuel said. "Hopefully he'll come back and bounce back from whatever little injury he had."

Manuel's only target to Watkins came on the play in which he was injured. In three preseason games, Watkins has three catches for 21 yards.

In May, the Bills traded their 2015 first-round pick to the Cleveland Browns to select Watkins, the former Clemson star, fourth overall.