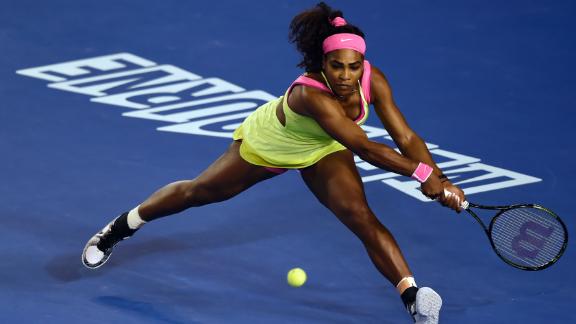 Serena Williams is returning to play in the Indian Wells tournament that has "haunted" her since 2001 with her love of tennis and the spirit of forgiveness as motivating factors, she writes in a first-person columnpublished by Time.com on Wednesday.

"I play for the love of the game. And it is with that love in mind, and a new understanding of the true meaning of forgiveness, that I will proudly return to Indian Wells in 2015," she wrote.

After winning the tournament in 2001, Serena vowed never to return to play there because of the harsh treatment she received from fans.

Serena and Venus were scheduled to meet in the semifinals at Indian Wells in 2001, but 20 minutes before the match, Venus withdrew because of tendinitis, and fans booed them. Elena Dementieva, whom Venus had beaten in the quarterfinals to set up that semifinal match, stirred up controversy when she was asked in a news conference afterward who she thought would win the match between the sisters, saying she believed their father, Richard, would decide the winner.

"The false allegations that our matches were fixed hurt, cut and ripped into us deeply," Serena Williams wrote on Time.com. "The undercurrent of racism was painful, confusing and unfair. In a game I loved with all my heart, at one of my most cherished tournaments, I suddenly felt unwelcome, alone and afraid."

Serena went on to win her second title there but was booed loudly throughout the match. The boycott was on. Richard Williams later said he heard racial slurs from the crowd during the final.

In her story for Time, Serena wrote how the boos affected her.

"When I was booed at Indian Wells -- by what seemed like the whole world -- my voice of doubt became real. I didn't understand what was going on in that moment. But worse, I had no desire to even win. It happened very quickly.

"This haunted me for a long time. It haunted Venus and our family as well. But most of all, it angered and saddened my father. He dedicated his whole life to prepping us for this incredible journey, and there he had to sit and watch his daughter being taunted, sparking cold memories of his experiences growing up in the South," she wrote.

Serena she spent "hours crying in the Indian Wells locker room" after her title victory in 2001, and on the drive back to Los Angelesshe felt "as if I had lost the biggest game ever -- not a mere tennis game but a bigger fight for equality," she wrote.

Serena writes, however, that an incident last year, whenRussian Tennis Federation president Shamil Tarpischev referred to her and Venus as the "Williams brothers" in a late-night show where Dementieva also was a guest, helped change her thinking.

Dementieva did not laugh at the comment.Tarpischev was suspended for a year and fined $25,000 for questioning the sisters' gender. And the tennis community's quick defense of her againstTarpischev's comments convinced Serena that times have changed in the sport.

"It reminded me how far the sport has come, and how far I've come, too," she wrote.

Thirty-three-year-old Serena, who won the Australian Open last week -- her 19th Grand Slam title -- writes that she believes the fans at Indian Wells understand her better now than they did in 2001.

"Indian Wells was a pivotal moment of my story, and I am a part of the tournament's story as well. Together we have a chance to write a different ending," she wrote.

The BNP Paribas Open at Indian Wells is scheduled to be played from March 11-22.

With her latest Australian women's title, Williams moved into outright second place on the list of major winners in the Open era, behind only Steffi Graf's 22.