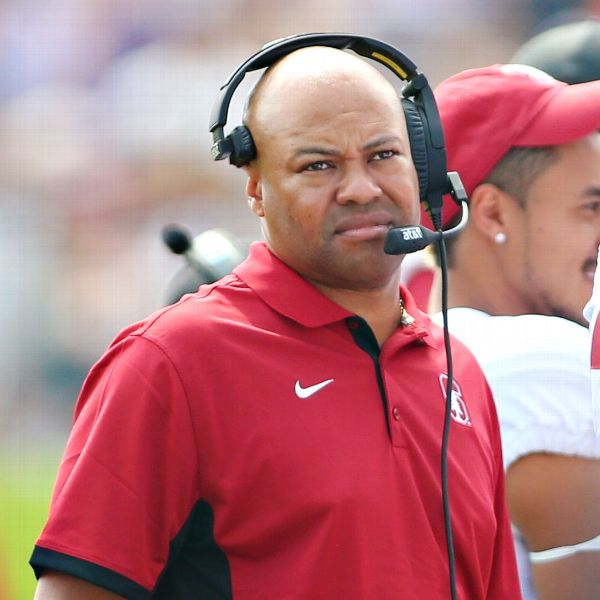 Stanford coach David Shaw said the College Football Playoff selection committee should pay greater attention to when teams have byes during the season, and how the entire schedule is laid out.

Shaw, who sat down with ESPN on Tuesday for a wide-ranging interview, said he has thought a lot about the playoff this summer. He has spoken with several committee members this offseason, and CFP executive director Bill Hancock on Monday.

"How the schedule lays out may be more important than strength of schedule," Shaw said. "What I mean by that is, if you look at USC last year, to play 11 straight games without a bye -- all Division I opponents, no I-AA opponents, and play right into the Pac-12 championship game and win that one -- that to me is more impressive than just having a strong schedule but then having a Week 7 bye, or a Week 8 I-AA opponent, which kind of gives you a break."

Last season was the first since 1995 that USC played the entire regular season without a bye week. Its two losses were on the road -- a Friday night at Washington State, and Oct. 21 at Notre Dame. In spite of beating Stanford for the Pac-12 title, USC finished No. 8, right behind three-loss Auburn, which had a bye week between back-to-back road games against Arkansas and Texas A&M.

The difference was that Auburn earned two November wins against the committee's No. 1 teams in Georgia and Alabama.

Hancock said Tuesday the 13-member committee does consider more than just who a team played and where the game was.

Shaw said his view on scheduling is "a new way of looking at it."

"I think looking at how difficult it is for the student-athletes to play consecutive weeks and then, we're one of the few conferences that will play a significant number of Friday night games," he said, adding that the Friday night road winning percentages are "very, very low."

"Those combinations of things really have to be taken into account, and I think that will honestly bump up our conference to a certain degree because it's not just how hard the schedule is, who you play, it's when you play who you play."
Report a correction or typo
Related topics:
sportsespnselection committeecollege football playoffcollege footballstanford cardinalcfpdavid shaw
Copyright © 2021 ESPN Internet Ventures. All rights reserved.
TOP STORIES
CA launches electronic vaccine verification
Charges filed in stabbing of 94-year-old woman in SF
AccuWeather forecast: Heat wave, day 3 - record warmth less likely
Robocall-like tech used to get to front of EDD line
LIVE: Biden announces 300M COVID-19 shots given in 150 days
Cal/OSHA votes to allow fully vaccinated workers to ditch face masks
LIST: Juneteenth events in the Bay Area
Show More
CA will stop giving unemployment benefits to people not looking for jobs
How CA's improvements to power grid could prevent outages
Here's how some in the Bay Area beat hottest day of heat wave
'Super Science with Drew': Rainbows style
CA power grid declares Flex Alert for tonight
More TOP STORIES News