Steve Sarkisian issues thanks, encouragement to Trojans in tweets 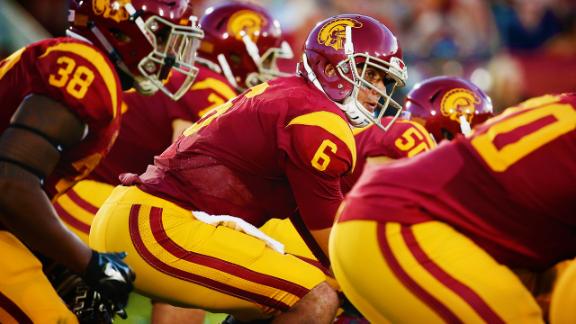 Two days after he was fired as coach of theUSC Trojans, Steve Sarkisian took to Twitter to make his first public comments, offering a thank you to his supporters and encouragement to his now-former team ahead of its game Saturday at No. 14 Notre Dame.

Sarkisian initially was placed on an indefinite leave of absence Sunday after athletic director Pat Haden learned he had showed up for a team meeting seemingly intoxicated, but after a further investigation into the coach's conduct, Haden determined Sarkisian "was not healthy" and made the decision to fire him.

"Obviously, [Sarkisian is] dealing with some tough stuff right now, but I wish him nothing but the best. I really do," Kessler said. "There's no hard feelings from me. I've been praying for him. I've been hoping things are going to go good for him. He's always been great to me, so I have no hard feelings there.

"I know this team doesn't, either. The first thing this team wants is for him to get better. We're still going to support him as he goes through the next steps he takes, but our main focus right now is getting back out there. We still have a game Saturday."

Sarkisian's trouble with alcohol drew national attention in August after he appeared under the influence at a booster event and used profanity while addressing a crowd of an estimated 2,500 people.

He later apologized for his behavior and blamed it on using a mixture of medicine and alcohol, and said he would seek unspecified treatment.

The Trojans' offensive coordinator, Clay Helton, was named interim head coach and will lead the team for the rest of the season.