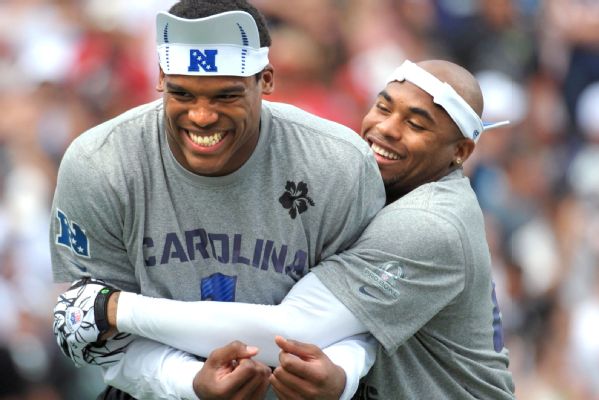 CHARLOTTE, N.C. -- There were rumblings when the Carolina Panthers released wide receiver Steve Smith Sr. in 2014 that his strained relationship with quarterback Cam Newton played a role in the decision.

Smith and Newton, as well as the organization, have shied away from that topic.

But in the NFL Network's "Steve Smith: A Football Life" that airs Friday at 9 p.m., Carolina's all-time leading receiver and others give credence to the rumblings.

"We bumped heads for the obvious reason," Smith said in a preview of the show provided to media outlets. "He's the first overall pick and he was a star where he was. I was 31 years old. I had three kids. So we were two people in two different phases of their life."

Former Carolina offensive tackle Jordan Gross, who was Smith's teammate with the Panthers and at the University of Utah, said Smith's lack of patience with the first pick of the 2011 draft was a factor in the team's decision to let him go.

"Really, I think the organization felt like for Cam to flourish they needed Steve to step down," Gross told the NFL Network. "It wasn't an easy decision."

"Emotionally, it was hard for everybody because of what he's done for this organization, the impact he's had in the community," wide receivers coach Ricky Proehl said. "He's the best Panther to step foot in Bank of America Stadium, but I think everybody understood that he probably needed a change.

"It was probably good for everybody."

"Every team that called, I looked at their schedule," Smith said. "I don't know what week but I knew the Panthers were on that schedule [for the Ravens]."

Smith told a local radio station it would be "blood and guts" when he faced his former team. In September of 2014, he had 139 yards receiving and two touchdowns as the Ravens beat Carolina 38-10.

Most of Smith's anger was directed at new general manager Dave Gettleman, who ultimately made the decision to let the receiver go. That Smith had no idea the move was coming bothered him the most.

He heard the news on WFNZ Radio in Charlotte.

"If you're going to let me go, just let me know," said Smith, who had 836 catches, 12,197 yards and 67 touchdowns with the Panthers. "Don't announce it to someone else."
Related topics:
sportsespnsteve smith srnflcarolina pantherscam newton
Copyright © 2021 ESPN Internet Ventures. All rights reserved.
More Videos
From CNN Newsource affiliates
TOP STORIES