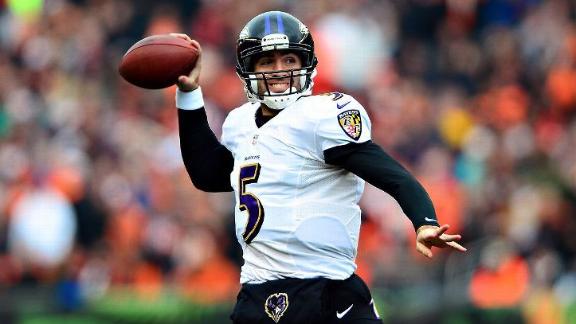 "Joe's just Cool Joe. He's not the most vocal," Suggs said Wednesday, a day before the official start of training camp. "But sometimes we may need that. He may need to cuss somebody out. He may have to cuss me out. It's good to hear your quarterback get after somebody sometimes. I think it would be a good thing. At the end of the day, we still love Cool Joe."

Last year, Flacco and Suggs playfully exchanged verbal jabs throughout training camp practices. Suggs even acknowledged that Flacco had cussed him out before.

"But Joe knows how to do his subliminal slick shots," Suggs said. "We're looking for more direct."

This isn't the first time a teammate wanted Flacco to become more animated. During the Ravens' Super Bowl run two years ago, linebacker Ray Lewis said Flacco had to become more vocal to take over as a leader.

Flacco disagreed with Lewis at the time, saying, "There are a lot of different ways to lead. You've got to do it your own way."

Suggs, who is the senior member on the Ravens, said no one should try to replace Lewis.

"He's one of the greatest leaders ever," Suggs said. "There'll probably never be another Ray Lewis or another leader like that on the football field. You shouldn't even try to replicate that. There are a lot of leaders on this team, and I'm really looking forward to see Joe Flacco come into his own, be one of those premier, elite quarterbacks."