Tina Charles donates half of salary 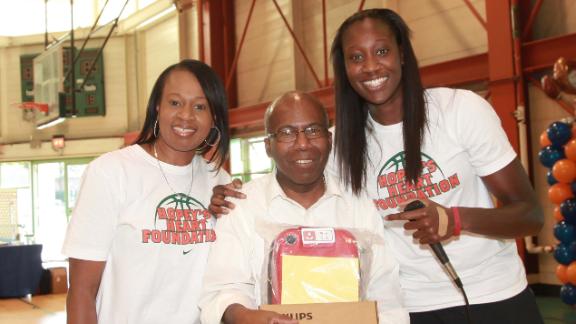 The New York native once again will donate half of her WNBA salary to a charity she started to honor her aunt, who died of multiple organ failure in 2013.

Charles has already bought 142 automatic external defibrillators over the past few years. She'll donate approximately $50,000 of her salary for the second straight season to purchase more, including 16 that are headed to Europe on July 4.

"It means a lot just to keep the awareness out there about sudden cardiac arrest," Charles said. "Taking an interest in others is key in my life. It's my way of giving back. My passion of placing AEDs. Anything I can do to impact an institution with an AED is extremely important to me."

The foundation, Hopey's Heart, provides health education, CPR training and lifesaving AEDs in schools, communities and recreational centers. It honors not just Charles' aunt but also Wes Leonard, a high school basketball player in Michigan who died in 2011 of sudden cardiac arrest after hitting the winning shot for his team.

Now Charles is expanding her foundation's reach to Europe. Starting next season, all EuroLeague women arenas will be required to have an AED on site thanks in large part to Charles, who played in Turkey this past winter.

Charles spoke at a meeting of the EuroLeague women's general managers that took place during their Final Four in April.

"I commend Tina Charles for all of the great work she does through Hopey's Heart Foundation," said FIBA Europe president Turgay Demirel in April. "Tina is a fantastic example of a basketball player making a difference on and off the court, and this project is a welcome contribution to our efforts to provide the safest possible playing environment for our athletes."

Being charitable is nothing new for Charles. She donated money to build a school in Mali in 2012.

"She makes a difference," said Washington coach Mike Thibault, who coached Charles in Connecticut at the start of her WNBA career from 2010-13 before she came to New York. "It's a wonderful thing and she sets a great example for other players in the league and allows our fans to see our players in our league can make a difference outside of basketball. I'm proud of her for it."

Teammate Swin Cash has been impressed by the 26-year-old Charles' maturity.

"She's the type of person that has a passion to not only be a great leader on the court but also the community," said Cash, who has her own charity and hosted 35 kids this past weekend in New York. "There are so many players that do amazing things."

Cash's group from her hometown of McKeesport, Pennsylvania, took in the Liberty's game against the Mystics on Sunday and went to the Statue of Liberty, World Trade Center and Empire State Building before heading back home.