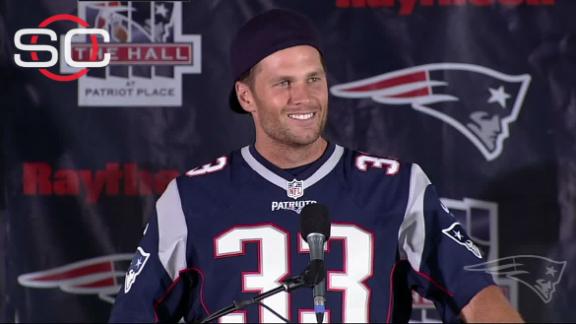 FOXBOROUGH, Mass. -- Quarterback Tom Brady, who has attempted to keep a low public and media profile since his decision not to pursue a Deflategate appeal to the U.S. Supreme Court, made a surprise appearance Monday night at the New England Patriots' Hall of Fame induction of his former teammate, running back Kevin Faulk.

Brady showed up at the end of the ceremony and unzipped his jacket onstage to reveal that he was wearing Faulk's old No. 33 jersey.

He then addressed the crowd of several thousand fans for about two minutes.

At that point, Brady said, "No, this is for Kevin!"

The connection between the two players who played 12 seasons together is well documented, as the 40-year-old Faulk had worn Brady's No. 12 jersey while announcing the Patriots' third-round draft choice at the 2016 NFL draft.

Brady concluded his remarks by saying, "Kevin, we love you, you're an amazing person, an amazing teammate. As great as a player as Kevin was, he's a better friend."

Brady, who turns 39 on Wednesday, had joked during his remarks, saying, "It's such a special night. But what's not very special about tonight is when the guys that are going into the Hall of Fame are your age."