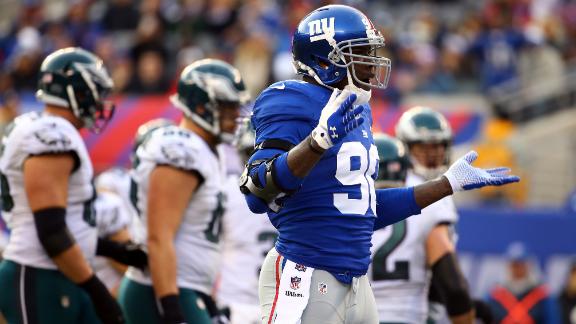 EAST RUTHERFORD, N.J. -- The New York Giants remain "optimistic" that injured defensive end Jason Pierre-Paul will play for them again, coach Tom Coughlin said Wednesday. But after seeing Pierre-Paul on Monday for the first time since he severely damaged his hand in a July 4 fireworks accident, the team decided he wasn't ready to return.

"Obviously it would be good if he was all healed and ready to go," Coughlin said before Giants practice. "But he was not. Hopefully, at some point in time, Jason will be ready to play and we'll get the green light."

Coughlin said Pierre-Paul was in very good spirits Monday when he met with coaches and team medical personnel, and he took that as a good sign for the situation going forward. But after seeing his hand and going over the medical information available to them, the Giants are back where they were a week ago with Pierre-Paul. And he's back home in South Florida until he's deemed ready to play.

"I wouldn't put any kind of time frame on it," Coughlin said. "It's not going to be something that I have anything to say about anyway. It's going to be the medical people."

Pierre-Paul has yet to sign his one-year, $14.81 million franchise tender, which means he's not under contract and doesn't count against the team's 53-man roster. Officially, he is on the reserve/franchise designation list.

The Giants have no plan to rescind the franchise tag, especially because they're under no obligation to pay him for games that occur before he signs it. So each game that passes without Pierre-Paul signing the tender reduces the amount of money the Giants have to pay him (and the amount he counts against this year's salary cap) by $871,352.94. Should he sign the tender, the team would have the option to place him on the non-football injury list, which would require him to miss the entire season and allow the Giants the option of not paying him at all.

But by not rescinding the tag, the team is indicating it believes he can come back this year and play at some point.

"Optimistic about going forward and feeling better and continuing to work towards being able to come back," Coughlin said of the situation. "So we'll monitor that. He came in the way he did, Mr. Personality, and he felt good about himself and where he's been. He's worked pretty hard. We actually saw a tape that showed him working, and he's done a lot of conditioning-type work. So I don't think there's anything to worry about there."

Coughlin on JPP: 'Not ready to play'
New York Giants coach Tom Coughlin says Jason Pierre-Paul is not ready to play and the injured DE has returned to south Florida.