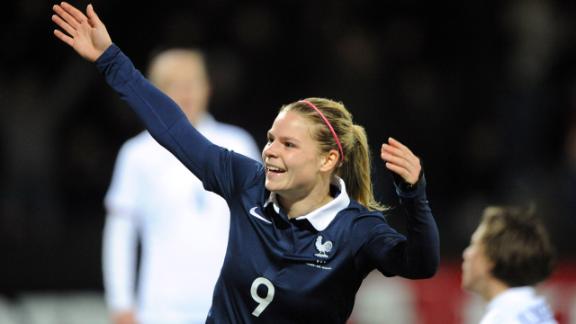 LORIENT, France -- France scored twice early in the second half to defeat the U.S. women's national team 2-0 Sunday in a tuneup game for the World Cup.

The goals by Eugenie Le Sommer and Jessica Houara came within a minute of each other. U.S. goalkeeper Ashlyn Harris was making just her fifth international appearance and playing in place of suspended Hope Solo.

All-time leading U.S. scorer Abby Wambach, coming off the bench, was unable to convert a penalty kick against goalkeeper Sarah Bouhaddi in the 66th minute.

This was third-ranked France's first victory in 17 matches against the United States. With a 0-0 draw against Brazil in late December, the second-ranked Americans have been shut out in consecutive games for the first time in 13 years. The U.S. is 14-1-2 against France.

Solo was serving a 30-day suspension from the team after her husband, former Seattle Seahawks tight end Jerramy Stevens, was arrested in Southern California on suspicion of driving under the influence. Solo was a passenger when Stevens was pulled over driving a U.S. Soccer vehicle.

The team was also without midfielder Megan Rapinoe, who strained a ligament in her right knee during training camp in January. Forward Sydney Leroux injured her ankle during camp and wasn't with the team, and veteran defender Christine Rampone was ruled out because of back pain.

But the United States saw the return of forward Alex Morgan, who was making her first appearance for the team since injuring her left ankle during the CONCACAF women's championship last October.

It was the first of 10 matches for the U.S. women before the team heads to Canada for the Women's World Cup. The United States drew a tough group with Sweden, Nigeria and Australia. France is grouped with England, Colombia and Mexico.

France is surging at the right time, with victories in the past several months over top-ranked Germany, No. 8 Brazil and now the United States.

The match was played before a sellout crowd of 15,663 at Stade du Moustoir.