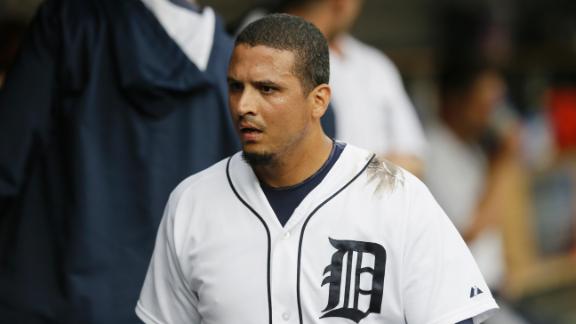 Dr. James Andrews is scheduled to perform surgery Tuesday to repair the injury. Detroit has not announced a timetable for Martinez's return.

General manager Dave Dombrowski said the injury hasn't altered Detroit's approach to the offseason -- not yet, at least.

"There are no changes in our plans at this time," Dombrowski said in an email. "We will evaluate that after his surgery."

Martinez will make $14 million this season after signing a four-year, $68 million contract in the offseason with the Tigers.

This is the second time Martinez has suffered a serious offseason knee injury as a Tiger. In 2012, he tore his left ACL in offseason conditioning and missed that entire season. Besides having surgery to repair that injury, he also underwent a microfracture procedure on the same knee earlier that year.

"It's not the same injury, but I'm still holding my breath," manager Brad Ausmus said.

When Martinez was injured in 2012, the Tigers responded by signing Prince Fielder to a nine-year, $214 million contract that Jan. 26. This injury occurred even later in the offseason, and there aren't any major power-hitting options left on the free-agent market.

Even if this injury turns out to be less severe, it's a jolt to a team whose spot atop the division is looking increasingly precarious. Max Scherzer, the 2013 AL Cy Young Award winner, left as a free agent to sign with Washington, and slugger Miguel Cabrera is coming off right ankle surgery.

Detroit made one big trade this offseason in an attempt to add power, dealing right-hander Rick Porcello to Boston for Yoenis Cespedes. The Tigers also are hoping for another strong season from outfielder J.D. Martinez, who hit 23 homers in 123 games last year.