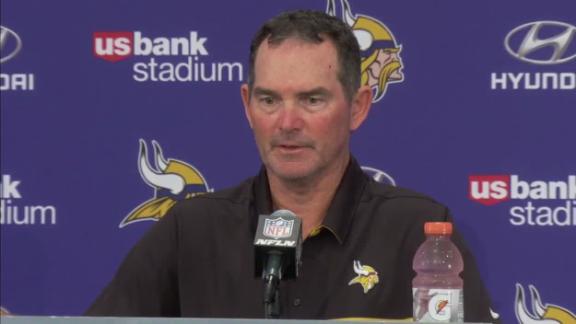 MINNEAPOLIS -- After the Minnesota Vikings' win over the Green Bay Packers on Sunday night, players on both teams remarked how loud U.S. Bank Stadium was for its first regular-season game.

The noise, however, didn't always play the way the home team would have liked.

The Vikings committed four false starts in the victory. Three of those were on Minnesota's offensive line, and after the game, guard Alex Boone said the noise in the stadium was more than the Vikings wanted at times.

"It's loud, for some reason, in the stadium," Boone said. "There's a lot of times where we can't hear the center. We could barely hear the snap count today a couple times -- a couple false starts, because guys wouldn't know when the snap was going. I'm not saying it's the fans' fault, but I'm just saying, it would be nice if they would shut the f--- up a little bit."

Minnesota committed 13 penalties in the17-14 win, which cost the Vikings 137 yards. But the noise from the capacity crowd of 66,813 seemed to be a positive overall.

"The fans were unbelievable. They were loud," coach Mike Zimmer said. "I've been in some of these games before where there's a lot more green in the stadium. There was a lot of purple in here tonight, and they were as good of a crowd as I've seen. In my opinion, it was pretty darn loud."

The big debut of the gleaming new $1.1 billion stadium was indeed a grand one, the culmination of a decadelong struggle to replace the drab and dingy Metrodome.

More than 20 stars from the team's proud past were in attendance, including the entire Purple People Eaters defensive line that led the Vikings to four Super Bowls in the 1960s and '70s. Hall of Famers Fran Tarkenton, Randall McDaniel and Cris Carter were there, and beloved former coach Bud Grant blew the Gjallarhorn to welcome the team to the field.

"For the first time ever, the best fans have the best stadium," Carter said during an in-game interview. "This is the greatest platform we've ever had to perform."

Pregame festivities included a huge party on The Commons in front of the stadium with live music for a crowd of thousands that piled into downtown Minneapolis hours before kickoff. As the game grew closer, the world's largest pivoting glass doors opened on the west side of the stadium to allow fans to stream in.

The Vikings asked the NFL for an extended halftime to put on an elaborate show, with the Minnesota Orchestra playing the soundtrack for a highlight video that was projected on to the field. After the video, members of Prince's band, The New Power Generation, joined the orchestra for a stirring rendition of "Purple Rain" that culminated with shimmering, purple confetti blanketing the crowd in tribute to the Minneapolis native, who died in April.

"It exceeded my expectations," said commissioner Roger Goodell, who was in attendance. "And you know where you are. You're in a Vikings stadium. And this is part of the Minnesota community. You can see how it fits into the community walking around the outside. The way they brought the tradition and the history of the team in, I think it's really incredibly well done."